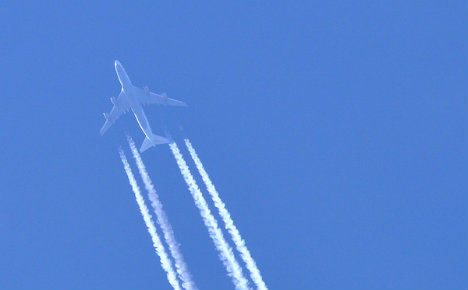 Experts think the ice fell from the undercarridge of a jet. Photo: Olivier Cabaret

Fortunately, nobody was hurt in the incident, which occurred in the Monteverde area of the city, but the falling ice completely destroyed the car's windscreen dashboard, passenger seats and gearbox.

Nearby residents even reported hearing a loud explosion at around 9.15 PM which sent many out onto their balconies to investigate the source of the noise.

For the moment it is unsure where the potentially deadly iceball came from, but investigators think it may have been caused by a leaking toilet on a passing jet liner.

‘Blue ice’ is the name commonly given to a mixture of human waste and liquid disinfectant which can leak from an aircraft’s waste system in case of a malfunction. The waste water then freezes at high altitude and then falls to earth as a giant iceball.

“I went onto the balcony of my boyfriend’s house at 10 pm and noticed what I thought was a white plastic bag on the front seat of my car, which I hadn’t left there,” the Aygo’s owner, Fabiola Nacci told Rome daily, Il Messaggero.

Nacci went down to check and discovered that it had been devastated by the falling ice and was filled with shards of frozen water.

She immediately called the police, who collected samples of the ice for analysis and interviewed local residents.

If analysis proves the meteorite was indeed the frozen remnants of a leaking septic tank, the aircraft responsible could face charges over violating aircraft safety laws if it can be tracked down using flight data.

“The repairs will cost me about half of the Aygo’s current value,” she added.