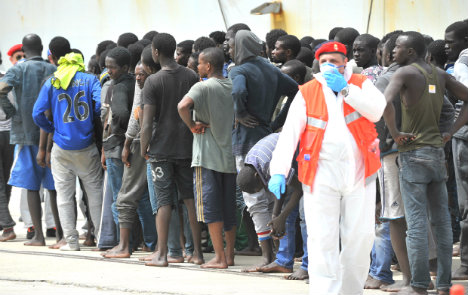 “Europe’s migrant crisis is an epochal struggle,” Italy’s Interior Minister, Angelino Alfano told journalists in Rome. “This communication campaign is just one of the ways in which we are seeking to tackle the crisis.”

The €1.5 million project, called ‘Migrant Aware’, will use a series of videos and recordings published online to warn sub-Saharan Africans of the dangers they face when crossing the Sahara Desert and Mediterranean Sea with illegal trafficking networks.

“’Migrant Aware’ is a message in a bottle we have thrown into cyberspace,” Alfano said.

The message involves a series of harrowing first-person accounts of the horrors more than 150 migrants faced on their journeys, with all testimonies available in English, French and Arabic in a bid to reach as many people as possible.

“It is a road to hell,” says 36-year-old west African, Tchamba while looking at the camera. “The traffickers don’t care if you live or die.”

The testimonies will also be broadcast on local radio stations in the horn of Africa as part of the project and Malian pop star Rokia Traorè has even been commissioned to write a song entitled ‘Be aware brother, be aware sister’ which will warn people about the dangers people face at the hands of traffickers.

“Obviously we pride ourselves on welcoming all those fleeing war and don’t intend to stop them from coming,” Alfano said. “But we can’t welcome everybody.”

In 2014, the majority of the 170,000 migrant arrivals to Italy were refugees from war-torn countries like Syria, Afghanistan and Eritrea.

“However, in 2015 some 60 percent of the 150,000 arrivals were not legitimate humanitarian cases, rather people seeking better, more prosperous life,” Alfano said.

“The campaign will help stop people from suffering and dying needlessly,” said the Federico Soda, a director for the Mediterranean at the International Organization for Migration (IOM).

“Italy has a moral duty to help migrants make an informed decision before they choose to cross.”