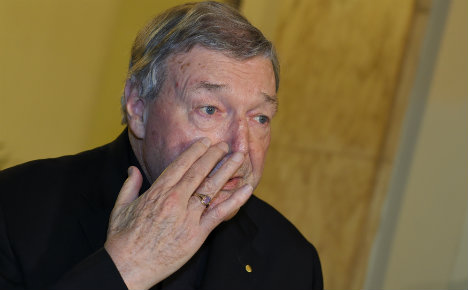 It follows explosive allegations against the cardinal aired by the Australian Broadcasting Corporation on Wednesday, which he strongly denied.

“That's a matter that we investigated and still are investigating,” Victoria Police Chief Commissioner Graham Ashton said of the claims.

They include allegations from two men, now in their 40s, who said they were groped by Pell in summer 1978-79 at Eureka pool in Ballarat, where the cleric had grown up and worked.

“You know, his hand touching your genitals and stuff on the outside of your bathers or shorts. And then that slowly became (a) hand down the front of the pants or your bathers or whatever you call them,” one of the complaints Lyndon Monument told the ABC.

The broadcaster also alleged Pell was naked in front of three young boys, believed to be aged eight to 10, in a Torquay surf club changing room in summer 1986-87.

It said it had obtained eight police statements from complainants, witnesses and family members that have been helping the police investigation.

Ashton said the matter had been sent to the Office of Public Prosecutions for their assessment on whether there was a case to answer.

“We're waiting to hear back from them at this stage,” he told Melbourne radio station 3AW, adding that while Pell had not been interviewed, detectives may be sent to Rome to do so.

Asked if charges were possible, he said: “Anything is possible at this stage.”

Pell, Australia's most senior Catholic cleric, has denied the allegations and suggested there was a conspiracy against him.

“He denies the claims absolutely,” said a statement from the 75-year-old's office, adding that they were “nothing more than a scandalous smear campaign, which appears to be championed by the ABC”.

The archbishops of Sydney and Melbourne both said Pell deserved the presumption of innocence.

“Trial by media benefits no one,” said Sydney Archbishop Anthony Fisher, while his Melbourne counterpart Denis Hart said Pell, who he has known for 55 years, was a good man.

“The allegations made on the ABC against Cardinal Pell do not reflect the man I know or the behaviour which I have observed over the years I have known him,” Hart said.

“Cardinal Pell is entitled to have allegations against him investigated according to the usual lawful processes without being compromised or sensationalized by the media.”

The allegations come just months after Pell admitted he “mucked up” in dealing with paedophile priests in Victoria in the 1970s, while giving evidence to a national inquiry into institutional responses to child sex abuse.

He was accused of historic sex abuse claims when he was the Catholic Archbishop of Sydney in 2002, but was later cleared of any wrongdoing.

In comments to Australian media Thursday, Pell claimed that Victoria Police leaked information to the ABC and had compromised the judicial process.

But Ashton denied this, adding that Pell had previously demanded an inquiry into claims of police leaks which were forwarded to the Independent Broad-based Anti-corruption Commission (IBAC).

“And IBAC had a look at that and wrote back to me saying they had examined that and dismissed the complaint,” Ashton said.

He left for the Vatican in 2014 after being hand-picked by Pope Francis to make the church's finances more transparent, although his powers were reined in earlier this month.