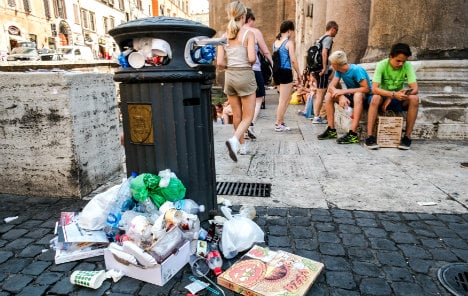 The Five Star Movement council, which was elected to city hall last month on the back of new Mayor Virginia Raggi’s promise to finally clean up Rome, has wasted no time in getting down to business.

The council promises the city will be spick ad span “by August 20th”, thanks to a new plan that will see the Rome's waste management authority, AMA, overhauled. The plan was activated on Wednesday and covers all aspects of the city’s waste disposal from recycling and rubbish collections to landfills and street cleaning.

The program was drawn up by outgoing AMA chief, Daniele Fortini, after the city’s new environmental assessor, the Five Star Movement’s Paola Muraro, demanded he develop a new strategy to help keep the city clean.

“The plan contains what is expected for a swift return to normality,” Murano told reporters.

Waste disposal problems are a long-standing bugbear for residents of the Eternal City.

Even without the frequent strikes which bring collections to a halt, rubbish and litter quickly pile up in the city’s ancient streets – embarrassingly, often in front of some of its most iconic landmarks.

The issue has even spawned a popular website called ’Rome is disgusting’ which charts the levels of degradation in the capital.

Despite the problems, Rome's citizens pay a whopping €250 each year to keep the streets clean, a figure 50 percent higher than the national average.

Murano also announced the council was also seeking a successor to Fortini but would take its time to ensure the right candidate is chosen.

“We're looking at CVs,” Murano said. “Citizens must rest assured that the M5S chooses people based on merit, not politics.”