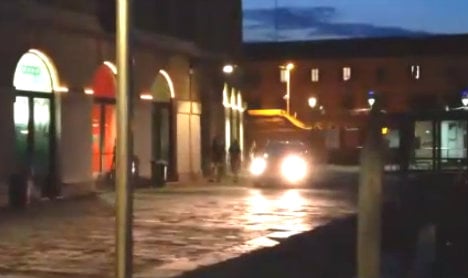 After taking their blue Fiat Panda over a pedestrian bridge and 200 metres up the Grand Canal, the hapless couple almost ran over an unsuspecting passerby in front of a Coop supermarket before they were stopped by angry locals, La Nuova Venezia reported.

Cars are strictly forbidden in Venice, a fact which should be obvious given the city's famous lack of roads, not to mention its iconic gondolas and vaporettoes (water-buses).

However, the tourists seemingly had no idea the city was a car-free zone and blamed their sat-nav for the error.

“We're just trying to reach our hotel which should be two kilometers from here,” one of the tourists told the locals. “Google Maps sent us this way.”

A video of their attempt can be seen below.

In spite of the plethora of road signs – in English and Italian – which warn visitors that they need to leave their cars as soon as they arrive in the historic city, several tourists attempt to drive through Venice each year.

In late June, two English visitors were stopped and fined by local police after taking their Mercedes Station Wagon for a spin in the city centre.

The inappropriate antics of the 20 million tourists that descend upon the tiny lagoon city each year have long irked Venice residents. Earlier this year, the council even introduced a scheme that saw locals admitted onto the vaporettoes ahead of visitors. While it is possible to cross the Venetian lagoon by car on the SS11, vehicles must be left at one the designated (and very expensive) car parks at Piazzale Roma, before visitors proceed into the city by boat.