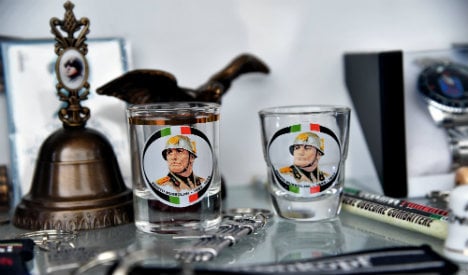 The regional government of Emilia-Romagna on Wednesday voted in favour of a motion which will see the sale of fascist souvenirs punishable with between six months and two years in jail.

The sale of items glorifying fascism is now classed as 'apologizing for fascism', an act which was criminalized in Italy in 1952.

Emilia-Romagna is the first of Italy's 20 regions to ban the sale of fascist souvenirs and local councillors say they hope other regions will soon follow suit.

“The move is an important step in sending out a strong message against the trivialization of history and fascism's evils” Democratic Party councillor Nadia Rossi, told La Repubblica.

The motion was first tabled Rimini mayor Andrea Gnassi last year, when two Jewish-American tourists complained after walking passed the window of a shop which was proudly displaying a selection of Mussolini and Hitler-themed wines.

Calls for the ban my have been instigated in Rimini, but nowhere are fascist souvenirs more popular than in in Il Duce's hometown of Predappio, which has become a focal point for neo-fascists.

Each year, some 50,000 Mussolini pilgrims visit Predappio in order to have their photo taken at Mussolini's tomb and leave messages of admiration in the visitor's book near his grave. As a result, a thriving industry selling a whole host of bizarre trinkets bearing fascist iconography has sprung up in the town.

There is no end to what kind of items can be plastered with images of Mussolini, with souvenirs including everything from wine and t-shirts to calendars, cigarette lighters and even baby grows. But  not everyone is in favour of the motion.

Italy's far-right Northern League, along with the centre-right Brothers of Italy and Forza Italia parties, all tried to prevent it from passing on the grounds it would damage the region's economy.

“ 'Apologizing for fascism' is really just a pretext for hitting business owners who make a living from selling souvenirs,” complained Massimiliano Pompignoli from the Northern League party.