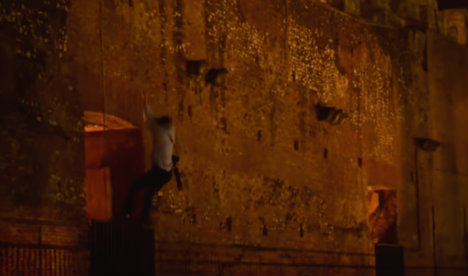 The German tourists climbed the building in the dead of night. Photo: Screengrab/YouTube

The slickly filmed and edited video was posted on YouTube at the end of May by Flavius Vasily, who is part of a group of urban explorers called Visual Enemies, and shows him and an accomplice breaking into the iconic Flavian Amphitheatre in the dead of night.

Once inside, the pair embark on a daredevil ascent of the building's outer walls before taking a stroll around the two-millennia-old walls while filming the people and cars in the streets below.

The video can be seen below.

The video is this summer's latest example of tomfoolery carried out at one of Rome's landmarks by visitors.

Tourists have already hit headlines for their repeated dips in Rome's historic fountains and such disrespect for the city's cultural heritage is a major bugbear for ordinary Roman residents, who insist visitors show the Eternal City's monuments the utmost respect during their stay.

“We don't feel bad because very cruel things happened there and we don't care about our critics,” Vasily wrote in reply to comments condemning the reckless act on his YouTube channel.

Apart from the disrespect the two daredevils show for the ancient building, which was completed in AD 80, the video has angered Romans for a different reason: the lax levels of security which allowed the climb to happen.

“Such excellent security!” tweeted one Rome resident after seeing the video. Anti-terrorism? Hahaha!”

In light of recent terror attacks in France and Germany, Italy's terror level is supposedly set to 'level 2' – the highest level possible in the absence of a direct attack.

Aside from risking their lives in the stunt, the two men also risked criminal charges.

In the past, judges have come down hard on anyone found vandalizing the Colosseum, with one Russian tourist being fined €20,000 for carving a giant 'K' into one of the building's pillars last year.

The act of climbing buildings by night, or 'buildering', has been a popular past-time for centuries. Alain Robert – otherwise known as 'the French Spiderman' – has become an iconic figure in the world of climbing thanks to a series of illegal and death-defying free climbs of the world's largest skyscrapers.