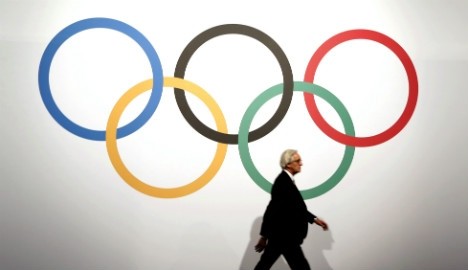 Is Rome going to walk away from its Olympic bid? Photo: Gabriel Buoys/AFP

Many believe the Games could be a huge economic benefit for the Italian capital.

But not the populist Five Star Movement (M5S), which took control of city hall in June.

Rome's new mayor, 37-year-old lawyer Virginia Raggi, has repeatedly said she is not in favour of the bid, insisting the city had more pressing issues to solve, such as its decaying infrastructure, terrible waste management and endemic corruption.

The International Olympic Committee (IOC) will not choose the 2024 host country until September 2017 and if it is to win the games, Rome still has to beat off stiff competition from Budapest, Paris and Los Angeles.

But many think Rome will pull out of the running in October after it said nobody from city hall would represent the city at the games in Rio de Janeiro, which get underway on Saturday.

“The call will be made in October and we are still debating the possibility of putting the issue to a referendum later this year,” council spokesperson Mauro Gabrielli told The Local.

But why would Rome want to throw the towel in early?

Far and away, the biggest objection to hosting the games boils down to money.

After years of mismanagement, Rome is indebted to the tune of €13 billion and hosting the Olympics doesn't come cheap.

Even though the Italian Olympic Committee, Coni, insists just €5.3 billion will be needed to cover hosting an Olympics, Raggi has promised not to drag the city into further debt by picking up the tab for the world's biggest sporting event. Many economists believe hosting the Olympics simply doesn't pay and point to the derelict Olympic structures in modern-day Athens, which spent €13 billion to host the games in 2004 as a prime example.

By the time the Greek debt crisis hit in 2007, the cost represented five percent of the country's national debt.

“In economics it's known as the 'curse of the winners' because whichever [city] wins the games sees its economy worsen,” reads a quote from the president of the International Association of Sports Economists, Wladimir Adreff, on the homepage of a website calling for a referendum on Rome's candidacy, set up by Italy's Radical Party.

But the argument that Rome cannot afford to host the Olympics doesn't hold water with everyone.

As many have pointed out, the cost of hosting the event doesn't fall squarely on local governments.

The lion's share of funds for each city's bid come from national government funds and each Olympic city also cashes in on generous sponsorship deals, broadcast revenue as well as getting a hefty grant from the IOC.

In order to host the games in 2012, London City Council stumped up just 10 percent of the total cost.

Supporters of Rome's bid say the initial expense of the games could be offset by their long-term positive impact on the city's finances and argue that 170,000 jobs would be created between 2017 and 2024 if Rome wins the bid.

“Thanks to the legacy of Rome's 1960 Olympics, the city already has 70 percent of the structures it needs for the games,” a spokesperson for Rome's 2024 campaign team, told The Local.

“The money that is spent would go towards building structures that can be put to good use after 2024 and investing in existing infrastructure,” they added.

Under current plans, an Olympic village with the capacity to host 12,000 people would be built in the city's rundown Tor Vergata suburb, which would be transformed into a state-of-the-art university campus in 2025.

“Olympic money could ensure the isolated Tor Vergata is finally linked up with the city centre, which would breathe new life into the area.”

Rome does not have to look particularly far for examples of cities which have successfully exploited the opportunities for redevelopment that the Olympics provide.

The 2006 Winter Olympics are credited for transforming Alpine Turin from a city in industrial decline to the vibrant, creative and tourist-friendly place it is today. Italy's flag-bearer at the 2006 games in Turin. Photo: Filippo Monteforte/AFP

“As someone who was living in the city in the years between 1997 and 2003 I can confirm that things weren't great,' Turin resident Emanuele Dughera told The Local.

“The Winter Olympics came at the right time for Turin, which was looking for a new identity after much of its traditional industries, like [carmakers] Fiat, moved their workshops abroad.”

Olympic cash was invested in the city's road, tram and underground infrastructure and the city's first Metro line was opened in time the games, which were televised worldwide.

They proved to be a great advert for the city and did much to promote Turin as a tourist destination.

A decade after the games, and the city is reaping dividends.

In January, The New York Times named Turin as one of its top destinations for 2016.

Many of the city's Olympic locations have been redeveloped into cultural spaces and business hubs while others have become chic restaurants and bars heaving with a new breed of proudly metropolitan Torinesi.

“By the end of 2006 everything had changed: the city had embraced creativity and imagination.” Dughera added.

Though Rome may not need to improve its image as a tourist destination, Romans say the Games could restore a sense of pride to the city which has been scandalized by a slew of negative headlines in the international press over the last two years.

“I have zero interest in sport, but would love to see the city get the Games so we can show the world that Rome can be a fantastic city,” Flavia, a 22-year-old student told The Local.

“Yes we have our problems – but where doesn't?”

Speaking of problems, Italy is famous for two that go hand-in-hand: corruption and the mafia.

It is no exaggeration to say that whenever public money is up for grabs, mafia-related corruption scandals tend to be unearthed sooner or later.

Recent examples include, but are not limited to, the 2015 Expo in Milan, the G8 summit in La Maddalena and the Italia '90 World Cup.

Worryingly, levels of corruption in the Eternal City are thought to be stratospheric.

Rome is at the epicentre of the Italy's latest, high-profile graft scandal dubbed 'Mafia Capitale', which has seen some 46 local politicians placed on trial for corruption.

But for many, withdrawing an Olympic bid due to corruption concerns would be tantamount to admitting defeat.

“Not accepting the Olympic challenge out of fear sends out the message that Rome and Italy are no longer able to compete internationally,” the Rome 2024 spokesperson said, adding that everything would be done to reduce the risk of scandals.

“In the event Rome wins the games, Italy's Anti-Corruption Authority will oversee all contract tenders and ensure maximum transparency is provided amid Olympic preparations,” the spokesperson added.

However, the same Anti-Corruption Authority was unable to prevent numerous mafia-related scandals in the build up to Milan's 2015 Expo and its president Raffaele Cantone recently said Rome “lacked the necessary antibodies” to fight organized crime.

“'Roma Ladrona' (Thieving Rome) is how people see the city and I don't think that will change,” Sergio, a 44 year old barman in central Rome, told The Local.

“But corruption happens all over the world unfortunately and we shouldn't drop out of the running because of it. Corruption or not, the Games could be an amazing opportunity for the city, both culturally and economically.”

A poll earlier this year revealed Sergio is not in the minority.

In the event of an Olympic referendum as much as 77 percent of Rome's population are thought to favour an Olympic bid.

“Solving our rubbish problems and finishing Metro C would be my priorities, but I'd like to see what the city would do if given the chance to host the games,” Flavia added.