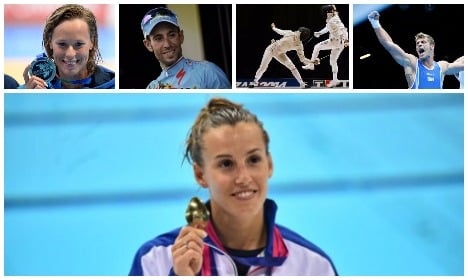 Which athletes are Italy's best shot at a gold medal? Photos: AFP

Italy has finished the last two Olympics in Beijing (2008) and London (2012) with eight gold medals.

But with champion high jumper (and pioneer of the half-beard) Marco Tamberi injured and star marathon man Alex Schwazer facing a ban for doping, where will Italy's medals come at this year's event?

Here are some of the most likely candidates. In spite of her young age, Rio 2016 will be Pellegrini's third Olympic games.

She took gold in the 200 metres freestyle in Beijing in 2008 and but finished outside of the medals in London four years later. Sicilian cyclist Vincenzo Nibali is one of the biggest names in global sport having won the 2010 Vuelta a España, the Tour de France in 2014 and the Giro d'Italia twice, in 2013 and 2016.

Nicknamed 'Lo squalo' (the shark) after the mythical great white shark that Sicilians say lives in the strait of Messina, Nibali is looking to get his teeth into a gold medal at Rio where he will compete in the road cycling event. Veteran Italian diver Tania Cagnotto is competing in her fourth Olympic games, which at 31 years of age, will realistically be her last.

Cagnotto has never finished among the medals at the Olympics, coming an agonizing fourth at the 2012 Olympics in London.

She will be looking to improve on that in Rio and is in good form, having recently picked up gold in the one metre springboard event at the Fina World Championships. Another athlete facing what is most probably his last chance at an Olympic glory is Clemente Russo.

The amateur boxer has taken Olympic silver at the last two games as well as taking World Championship gold in 2007 and 2013.

The 91kg heavyweight Russo will be hoping to get Italy off to a good start at the games when he steps into the ring on Saturday. Rosella Faimingo (L) is favourite to finish among the medals in Rio. Photo: Vasily Maximov/AFP

Another athlete who will be looking start strongly for Italy on Saturday is 25-year-old Sicilian fencer, Rosella Fiamingo.

After finishing seventh in the 2012 games in London, Fiamingo won World Championship golds in 2014 and 2015 and is among the favourites to take gold in Rio.

Fiamingo is left-handed, a fact which in fencing provides a considerable advantage over right- handed opponents.

As well as being handy with an épée, Fiamingo is also a classically trained pianist and student of nutrition at Catania university.