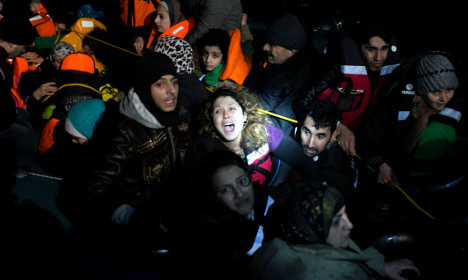 Today, there are a dozen such aid ships engaged in over 20 percent of the life-saving missions.

The first step was taken by Christopher and Regina Catrambone, a wealthy Italian-American couple based in Malta who were aghast at the shipwreck off the island of Lampedusa in October 2013 which claimed some 365 lives.

Their MOAS (Migrant Offshore Aid Station) association in 2014 launched the Phoenix, a 40-metre (130-foot) refurbished fishing vessel which paled in comparison with the vast fleet of the Mare Nostrum operation, then conducted by Italy’s navy and coastguard.

But some 3,000 of the 50,000 migrants rescued in the weeks that followed were saved by this small boat. And the MOAS operation became one to emulate.

“We could not leave people to die like that,” said Sophie Beau, the executive director of SOS Mediterranee, a French, Italian and German organisation founded in 2015.

There are now a dozen such humanitarian ships patrolling off the coast of Libya, chartered by MOAS, Doctors Without Borders (MSF), SOS Mediterranee, the Catalan Proactiva Open Arms and German Sea-Watch, Sea-Eye and Jugend Rettet.

“In some cases, we literally pulled people from the water,” said Gerard Canals, the Proactiva Open Arms mission head.

“In others we secured the dinghies while waiting for the larger ships, or sent our doctor aboard a military ship to examine migrants.”

Jugend Rettet jumped straight in at the deep end last week, its Iuventa ship dealing on day one with six overcrowded migrant dinghies at once.

The MOAS Phoenix and Responder sail in partnership with the Red Cross, while the MSF Aquarius is jointly chartered by SOS Mediterranee. All three, along with the MSF Bourbon Argos and Dignity, can take migrants aboard and transfer them to Italian ports.

They play a key part alongside the European Union’s Triton, run by border control agency Frontex, and Sophia, an operation to fight people trafficking.

Other smaller vessels are responsible for identifying boats in difficulty, distributing life jackets, keeping panicked migrants calm, an important step in stopping boats from overturning, and providing first aid in emergencies before the arrival of larger rescue boats.

Calls for help by satellite telephone from boats in distress come from a vast area and it’s a race against time for rescuers to save people from the flimsy boats or dinghies used by smugglers. Hundreds can drown in minutes if a vessel rolls over.

“We have to get there quickly, and in order to do so we need to be as many (rescue boats) as possible,” Marini said.

So far this year nearly 98,000 migrants have been pulled to safety, including some 20,300 saved by humanitarian ships.

It comes at a price. The Proactiva runs on a budget of 670,000 euros ($744,000), while MSF and MOAS rack up costs of over four million euros a year. Most of the staff on board are volunteers.

Despite their efforts, at least 3,000 people have died attempting the perilous crossing this year, 50 percent more than last year.

“We save as many people as possible, but we don’t see ourselves as part of the solution,” says Ruben Neugebauer, Sea-Watch spokesman, one of many from the humanitarian missions calling for legal and safe routes to be opened for asylum seekers.

Jens Pagotto, head of MSF’s Sicily mission, agrees. “We do not intend to stay forever, but until we see an alternative, and that doesn’t mean pushing people back to Libya, it’s hard to walk away”.