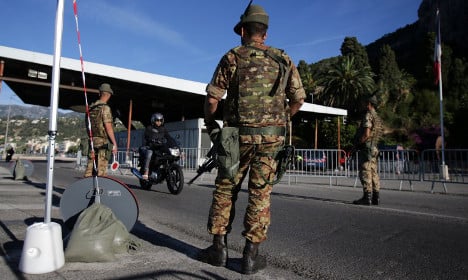 Italian servicemen stand guard and check vehicles at the Italian-French border. Photo: AFP
Friday saw chaotic scenes as migrants plunged into the sea by the rocky shoals at the border posting in Ventimiglia in desperate attempts to get into France.
Around 200 made it across according to reports in the French media, although they were rounded up over the weekend and sent back to Italy.
One Italian policeman died after suffering a heart attack during the chaos.
Police used tear gas to keep the migrants back, and officers arrested several members of the No Borders group, a European network fighting against the exclusion of migrants.
These members – some of whom were hooded and reportedly carrying knives and bats – were on the scene to help the migrants across into France.
The group threatened to hold a demonstration in the Italian border town over the weekend but called it off at the last minute.
The group has complained that the Italian government's latest efforts to help the migrants were not enough, after a temporary shelter was set up for just 360 people.
Meanwhile in France, Interior Minister Bernard Cazeneuve praised the efficiency of the security forces at the border during the weekend's charge.
He guaranteed “total mobilization of state services to ensure the security of France's borders” .
While such episodes of the migrant crisis have not made front page news in France recently, Le Figaro noted that a similar incident occurred in June at the Franco-Italian border, but had been overshadowed by the Euro 2016 football tournament.
Thousands of migrants are crossing the Mediterranean Sea in overcrowded boats, only to disperse across Europe, with many heading to the UK hoping for a better life in what many consider to be an El Dorado.