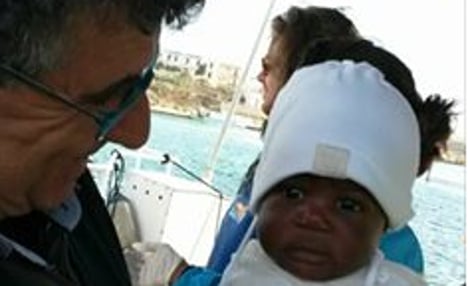 He has overseen the medical care of the 250,000 migrants who have arrived on the southern Italian island of Lampedusa's shores over the past 25 years, and knows the faces and stories behind the numbers reported in the media.

“I don't feel at all different from any other doctor,” Bartolo tells The Local. “All I know is that I’m a doctor, trying to do the right thing.”

The gynaecologist made global headlines after featuring in the docu-film Fuocoammare (Fire at sea), which looked at the daily lives of the inhabitants and migrants on the island which has become synonymous with Europe's migrant crisis.

But Bartolo has been assisting every migrant who arrived there since long before the crisis made headlines, working voluntarily for 25 years.

From 1991 to 1997, he worked with one other doctor, assisting the new arrivals at the local police station before the island's first refugee centre opened in 1998.

“Now there are three doctors at the quay when boats arrive, then we transfer people to the centre, where there are two other doctors and a nurse,” explains Bartolo. Common medical issues affecting the migrants are dehydration, malnourishment and hypothermia after long stretches at sea, or burns caused by petrol spills on board.


A crowded boat arriving at Lampedusa. Since 1991, Bartolo has assisted with every arrival of migrants to the island. Photo: Italian Navy/AFP

“I try to be optimistic, but there are moments of great distress,” he admits. However, he can't imagine doing anything else, or being anywhere else. He doesn’t see himself abandoning his role any time soon. “Lampedusa is my home, this is my life. I hope I will never be forced to leave my land, as is happening to these poor creatures.”

'The migrants are a blessing for Europe'

Shortly after the arrivals began, Bartolo says he began listening to each of the refugees' stories' – where they came from and where they hoped to go to – and he keeps in touch with many of those he helps.

The doctor is strongly critical of the current European policy towards migrants, which he describes as “idiotic” – failing to accept that the current influx is not a temporary trend which can be ignored, but will continue for a long time.

“In any case, these people are an important resource for all of Europe. Our continent is old – I’d go so far as to say senile – these are all healthy, strong young people, they’re a blessing,” he adds.

“Soon, I hope Europe will become aware and that things will change.”


The children's area at the medical centre. Photo: Pietro Bartolo/Facebook

His involvement in Fuocoammare came about by chance, when director Gianfranco Rosi needed medical help while carrying out research, and Bartolo started telling him some of the migrants' stories.

“The film gave me the opportunity to send the message I have always wanted to send, but haven't succeeded in doing so in 25 years of immigration. For me, nothing has changed, perhaps nobody realizes it. But I will always be the Lampedusa doctor taking care of Lampedusa, and our brothers who come from the sea.

“As I always say, everything comes from the sea. I welcome everyone, especially those who need help.”

The film won the Golden Bear at last year's Berlinale film festival, a win Bartolo dedicated “to my island, to my people, and to all those who didn’t make it”. At the time, he said: “I've seen so many terrible things, so many dead children, so many dead women, so many raped women. These things leave you with a great big empty hole in your stomach. These are nightmares that haunt me very often.”

Shocking pictures and reports of shipwrecks come out every few days, but the volume can make the average person numb to the news. Bartolo knows the faces and stories behind the numbers – in Fuocoammare, he recalls an Eritrean woman who had been taken for dead; her life was saved when the medical team noticed movements coming from the body bag and were able to resuscitate her.

READ ALSO: How this tiny Italian town opened its homes to refugees

The stories of some of the migrants arriving on Lampedusa’s shores have had a particular resonance with the outside world; for example, Favour, a baby girl whose mother died during the journey. Bartolo was pictured holding the baby, and requests to adopt her flooded in from around the world, but often the migrants’ individual stories are lost in the numbers.

When asked if there was a particular person or story he wanted to let the world know about, Bartolo responded: “More than the migrants who have gone through the centre, I would like to tell the world about those migrants who do not arrive, but sadly die before our eyes in that small stretch of sea that divides us from the African coast. We should be ashamed.”