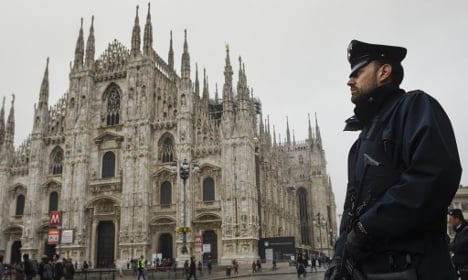 The 23-year-old found himself alone overnight in the cathedral two weeks ago, after security locked up while he was in the toilet. At the time, he said he chose to sleep among the spires rather than alert police as he “didn't want to cause alarm”.

But alarm he caused among Milan authorities over the lapse in security at one of Italy's most prominent.

Since then, extra security cameras with increased nighttime visibility have been installed, allowing police to keep an eye on Milan's most famous site 24 hours a day. Local police officers will also carry out a thorough search of the cathedral at closing time.

Veneranda Fabbrica, the private firm responsible for the upkeep and security of the cathedral, said in a statement that staff needed assistance from police to keep the Duomo secure “in the current delicate time”.

It wasn't the first time security at the Duomo has been breached; back in 2013, a base jumper was able to spend the night at the cathedral – this time intentionally – in order to parachute into the square at dawn.

Veneranda Fabbrica also said that the recent murder of a priest at a Normandy church, the “first time a symbol of Christianity in Europe has been hit”, was a reason for the new measures. In late 2015, the FBI warned that Milan's cathedral was among several “potential targets” for terrorist attacks in Italy.