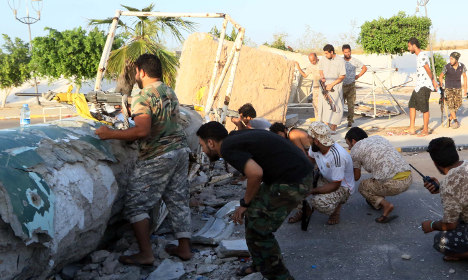 Members of Libyan pro-government forces hold a position as they fight to clear the Islamic State group (Isis) from its main Libyan stronghold of Sirte. Photo: AFP

The existence of the network was reportedly revealed by documents seized by Libyan agents after government forces took over an ISIS headquarters in the city of Sirte earlier this week.

The Italy-based militants were said to be associates of Abu Nassim, 47, a Tunisian who lived in Italy for most of his 20s and subsequently fought in Afghanistan and Syria, before becoming an ISIS commander in Libya.

The reports as concerns grow that ISIS fighters dispersed from Sirte could cross the Mediterranean on migrant boats and mount “lone wolf” terror attacks on Italian territory.

Security services have been put on a state of high alert for the peak holiday season and Interior Minister Angelino Alfano has stepped up expulsions of suspected extremist sympathizers.

Late on Saturday, Alfano said he had ordered the deportation of Hosni Hachemi Ben Hassem, a Tunisian imam based in a mosque at Andria in Puglia.

The 49-year-old imam had been cleared of charges of recruiting extremists but Alfano expelled him anyway on the basis of suspected incitement to racial hatred.

The cleric is the ninth imam to be kicked out since the start of 2015 under a ‘zero tolerance’ approach to extremist militancy which Alfano says has reduced the risk of a terror attack on Italian soil.

The centre-right minister has signed a total of 109 expulsion orders since the start of last year, 43 of them in 2016, he said in a statement.

Abu Nassim, whose real name is Moez Ben Abdelkader Fezzani, first arrived in Italy in 1989 to work on building sites.

Suspected of trying to radicalize and recruit other Arab immigrants, he disappeared in 1997 and resurfaced in Pakistan, on his way to join the late Osama bin Laden’s forces in Afghanistan.

He was arrested by US forces in 2001 and held at the Bagram airbase detention facility, which was to become notorious for the torture and killing of inmates.

Abu Nassim was transferred to Italy in 2009 after prosecutors tabled charges of terrorist recruitment related to his previous stay.

He was acquitted in 2012 and deported to Tunisia. He was convicted on appeal the following year, by which time he was already fighting in Syria.

Since 2014, he has commanded ISIS forces around the Libyan port of Sabratha.

Tunisia issued a warrant for his arrest in connection with the March 2015 Bardo Museum attack in Tunis, in which gunmen killed 21 tourists and a policeman.