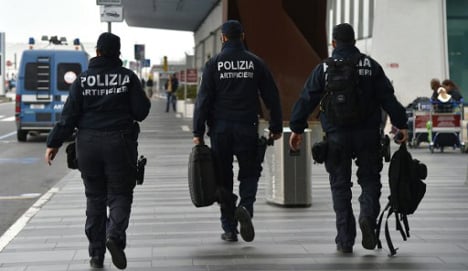 “Security is a national priority,” he said. “Our resources have grown over the last three years, and ours has been a safe country until now, in a context where there is no such thing as 'zero risk'.”

He praised the “enormous effort” of the police forces and added that the fact Italy had not been hit by the kind of terrorist attacks which have been seen in France, Germany and Belgium “is not just down to luck”.

He added that Italian police work 24-hours-a-day to prevent potential attacks and follow up on information received from other Interpol member countries across the world.

Members of all five of Italy's police units collaborate to track down suspected and potential terrorists, members of the mafia, as well as fugitives and missing people.

It was here that information emerged that a suspected accomplice of the man who killed 85 people after ramming a truck into a crowd of people celebrating Bastille Day on Nice's promenade in July, had lived in Puglia.

The unit receives an average of 800 alerts per day, Il Secolo XIX reported, ten percent of which are related to extreme Islamism. While many turn out to be of no importance, the officers check each one.

Officers track data such as the number of new arrivals on Italy's coasts, as well as observing interactive maps showing the locations of crimes reported across the country, which are updated in real time. They also receive information and alerts from other members of Interpol, for example Syria, Libya and the Balkans.

The officers have a particular role to play during large events; since the unit opened in June 2013, they have worked to ensure that the Milan Expo, held last year, and Catholic Jubilee Year, which got underway last November, were able to go off without a hitch, and assist international authorities with events including the Euro 2016 football championships and, currently, the Olympic Games in Rio.

In late July, Italy's Interior Minister Angelino Alfano told parliament that 35 Islamists had been expelled from the country so far in 2016, including nine imams.

Of those expelled “all were found to be working to radicalize others and promote jihad in Italy,” Alfano said.

On Friday, authorities ordered the expulsion of a Tunisian national suspected of planning an attack at the Leaning Tower of Pisa.

Meanwhile, Libyan authorities on Sunday warned Italy about an Isis cell based in the Milan area with links to one of the extremist group’s battle-hardened veterans.

Italy is in the process of setting up a national council for Islamic relations, which will work to clarify that the country's mosques are not receiving funding from foreign terror cells while ensuring Italian is spoken inside the structures.

Furthermore, over the last year, the overall crime rate has fallen by seven percent according to the Interior Ministry's figures, with the murder rate seeing the greatest drop. 1654 mafiosi have been arrested and 64 fugitives, of which ten were considered to pose an extremely high danger.