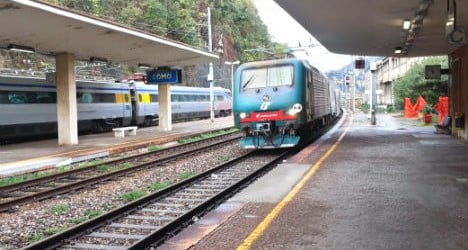 Miriam Behrens, director of the Swiss Refugee Council (SFH), travelled to the border at Chiasso and to the Italian city of Como on Wednesday and Thursday to assess the situation of refugees and “ensure that the rights of people looking for protection are entirely guaranteed,” she said in a statement.

Switzerland has been under fire for several weeks after turning back thousands of migrants from the Swiss border.

Any refugee has the right to claim asylum when they reach Switzerland. If they do, they should be registered with the Swiss migration office (SEM) and their application processed in due course. If they do not, because they want to transit through Switzerland and claim asylum in another country such as Germany, the terms of the Dublin agreement state they should be sent back to the first EU country they arrived in, in this case Italy.

In July alone over 3,000 people were sent back from Switzerland to Italy, news agencies said last week.

The Swiss border guards office says it is simply applying the law. However the situation has caused chaos in Como, where many refugees are now sleeping at the train station and in parks after being turned back.

Last week Amnesty International called for clarification from the Swiss after reports that children were being sent back from the border.

Now the SFH says confusion at the border is making it difficult for people to claim asylum.

“People who seek protection are not being sufficiently and correctly informed, which leads to confusion regarding exactly when they can lodge their asylum request,” it said in a statement.

“The situation is difficult for all parties concerned,” it added, saying there should be “more transparency” regarding the procedures in place and the asylum process.

It said Swiss border guards “need much more help” in terms of translators and child protection specialists in order to properly deal with those seeking to place an asylum request.

All those who wish to seek asylum in Switzerland should be put into the care of the SEM “even if there are doubts regarding their motives for seeking asylum”, it added.

While the number of people requesting asylum has gone down across the Schengen zone since last year, its member states do not have a satisfactory solution to the question of refugees in transit, it said.

Mechanisms for the redistribution of refugees were needed “to guarantee the protection of those concerned” and Switzerland should play its part in this, said the SFH.

In a statement on its website, the SEM outlined its policy – which applies to minors as well as adult refugees – and stressed that the border “is not closed”, refuting the claims made by some international media.

Switzerland respects the Dublin agreement and “cannot become a country for the transit of unregulated migration”, said the statement.

“Switzerland has long been seeking a unified European policy regarding asylum.”

“The difficult situation for those concerned at the southern border shows that clearly no single European country can meet the challenge alone – not Italy, not Germany and not Switzerland.”

Europe must find “lasting solutions” by working together, it said.

After decades of growth, the population of the European Union decreased over the past two years mostly due to the hundreds of thousands of deaths caused by the Covid-19 pandemic.

This trend is because, in 2020 and 2021 the two years marked by the crippling pandemic, there have been more deaths than births and the negative natural change has been more significant than the positive net migration.

But there are major differences across countries. For example, in numerical terms, Italy is the country where the population has decreased the most, while France has recorded the largest increase.

What is happening and how is the EU reacting?

In which countries is the population growing?

Net migration, the number of people arriving in the EU minus those leaving, was 1.1 million, not enough to compensate.

A population growth, however, was recorded in 17 countries. Nine (Belgium, Denmark, Ireland, France, Cyprus, Luxembourg, Malta, Netherlands and Sweden) had both a natural increase and positive net migration.

In eight EU countries (the Czech Republic, Germany, Estonia, Spain, Lithuania, Austria, Portugal and Finland), the population increased because of positive net migration, while the natural change was negative.

The largest increase in absolute terms was in France (+185,900). The highest natural increase was in Ireland (5.0 per 1,000 persons), while the biggest growth rate relative to the existing population was recorded in Luxembourg, Ireland, Cyprus and Malta (all above 8.0 per 1,000 persons). 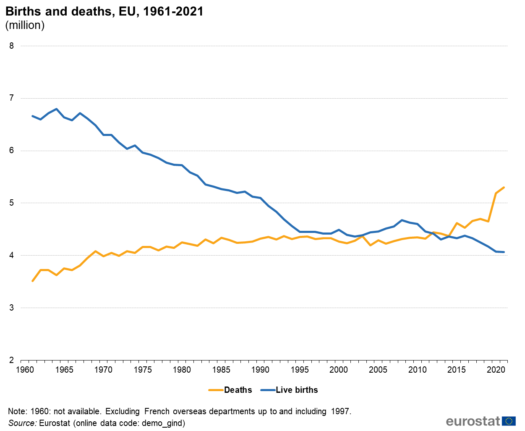 Where is the population declining?

On the other hand, 18 EU countries had negative rates of natural change, with deaths outnumbering births in 2021.

In Croatia, Greece, Latvia, Romania and Slovakia, the decrease was both by negative natural change and negative net migration.

The largest fall in population was reported in Italy, which lost over a quarter of a million (-253,100).

How is the EU responding to demographic change?

The natural change was positive until 2011 and turned negative in 2012 when net migration became the key factor for population growth. However, in 2020 and 2021, this no longer compensated for natural change and led to a decline.

READ ALSO: IN NUMBERS: One in four Austrian residents now of foreign origin

Over time, says Eurostat, the negative natural change is expected to continue given the ageing of the population if the fertility rate (total number of children born to each woman) remains low.

This poses questions for the future of the labour market and social security services, such as pensions and healthcare.

When she took on the Presidency of the European Commission, Ursula von der Leyen appointed Dubravka Šuica, a Croatian politician, as Commissioner for Democracy and Demography to deal with these changes.

Among measures in the discussion, in January 2021, the Commission launched a debate on Europe’s ageing society, suggesting steps for higher labour market participation, including more equality between women and men and longer working lives.

In April, the Commission proposed measures to make Europe more attractive for foreign workers, including simplifying rules for non-EU nationals who live on a long-term basis in the EU. These will have to be approved by the European Parliament and the EU Council.

In the fourth quarter of this year, the Commission also plans to present a communication on dealing with ‘brain drain’ and mitigate the challenges associated with population decline in regions with low birth rates and high net emigration.

This article is published in cooperation with Europe Street News, a news outlet about citizens’ rights in the EU and the UK.