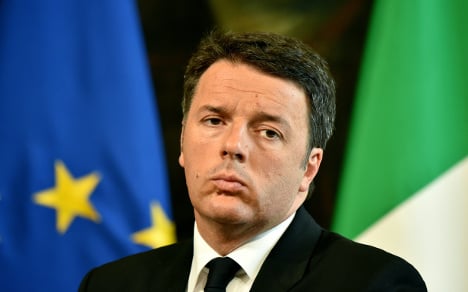 Italians have always been pessimistic about their economy, and tend to have little faith in data that shows even just a modicum of prosperity.

There was a spell of optimism when the energetic Matteo Renzi came to power in February 2014, ushering in reforms to reignite the debt-stricken economy and bringing political stability.

His good work has won praise across Europe, but with most Italians yet to feel the benefit of those reforms, despondency has well and truly returned.

So much so, it could propel them to exploit the upcoming referendum on constitutional reform – on which Renzi has staked his leadership – to make their frustration heard, a move many believe would be the catalyst to economic upheaval.

“It would be the strongest signal yet that people are fed up,” Francesco, a young Italian who manages his father’s electronic cigarette shop in northern Rome, told The Local.

When Renzi, the former mayor of Florence, elbowed Enrico Letta out of the way to become prime minister, he embodied an opportunity for change.

Riding high in the popularity sweepstakes, he worked hard to make up for the destruction and embarrassments of the Silvio Berlusconi era, promising a fresh era for a country which had always been seen as a basket case.

His centre-left Democratic Party performed well in the European elections in 2014 and the economy emerged from a painful triple-dip recession last year.

Renzi’s flagship reform was the so-called Jobs Act – an overhaul of the labour market that he pledged would create more jobs and give young people employment stability. But with the unemployment rate edging up to 11.6 percent in June, the reform has so far failed to live up to its promise.

“When Renzi came along, he gave good signals for change: he was strong with reforms – but the Jobs Act, in my opinion, has only made things worse,” Francesco, who tops up his salary by playing ‘Ringo’ in a Beatles cover band, added.

“Young people are struggling to find work and if they do, they struggle to get paid. It’s led to a rise in jobs in the black market. And whenever there is talk of recovery, businesses get hit with a new tax – labour costs are high, taxes are high, salaries are among the lowest in Europe; our economy just doesn’t seem to work for the people.”

Renzi was dealt a fresh blow last week with the news that the eurozone’s third-biggest economy ground to a halt in the second quarter of this year after steady growth since the middle of 2015.

Faced with a tumultuous few months, the 41-year-old has attempted to prop up spirits with talk of tax cuts, increased pensions for the poorest of pensioners and how the €500 million that will be saved from one of the key aims of the constitutional reform – the abolition of the heavily financed Senate – will be put into an anti-poverty fund.

Renzi will also try to woo voters by fighting for leeway on the 2017 budget in an attempt to reboot the stalling economy, even if it means a clash with Brussels.

Polls indicate that the outcome of the referendum, which is expected to be held before the end of the year, is too close to call.

But if Renzi loses, there’ll be much more than his political future at stake.

“We’re still expecting the referendum to pass but there are concerns,” Federico Santi, an analyst at Eurasia, told The Local.

“Italy has been positive [with Renzi] – the economy gained momentum, there have been reforms, and the politics have been relatively stable. All that would change if the referendum fails, reforms would fail – that would be one of the main consequences. Investors would take that as a negative sign.”

The malaise among Italy’s banks – which between them are saddled with €360 billion worth of ‘bad loans’ – is also a major concern, as a dismantled government would jeopardise any efforts to stop the situation from imploding. “Italy’s banks are a problem which the economy can live with at the moment,” Holger Schmieding, a chief economist at the Germany-based Berenberg Bank, told The Local.

“But if the political situation goes south, the banks will be in more trouble.”

However, the biggest risk to Italy, and the EU as a whole, on the horizon is the increasing popularity of the eurosceptic Five Star Movement party.

The party, founded by comedian Beppe Grillo and now the second-biggest in parliament, scored a milestone victory in the second and final round of local elections in June. The party’s Virginia Raggi was elected Rome’s first female mayor, while Chiara Appendino became mayor of Turin.

“If the referendum fails and Renzi steps down, it’s more likely that we’ll get a caretaker government rather than snap elections,” Santi said.

“But looking beyond – and somewhat irrespective of the referendum, the risk of the Five Star Movement taking hold over the next couple of years is rising.”

Schmieding said the party, which in the past has called for a referendum on Italy’s membership in the European single currency, winning a national election “will mean an end to the economic recovery”, as capital takes flight and investors shy away.

“Investors will also be waiting to see if the party follows through with a referendum on the euro – which would be a disaster,” he added.

The investment bank, Morgan Stanley, last week cut its growth forecasts for Italy for 2016, and foresees the economy cooling further next year.

Daniele Antonucci, a senior economist at the bank, wrote in the note that the referendum is “a crucial risk event”.

“This isn't just about a one-time shock, or the ups and downs of the business cycle,” he said.

“Italy's recent story has so far been one of reform, with significant progress in areas ranging from the labour market to the electoral law, and more incremental progress on the banking system, which remains a key vulnerability.

“The risk is that the rise in discontent may prevent further economic and institutional measures from coming through, given less support for the pro-reform camp in parliament. In fact, in a pessimistic scenario envisaging the protest parties taking power, the risk is that some of the reforms already implemented are undone.”