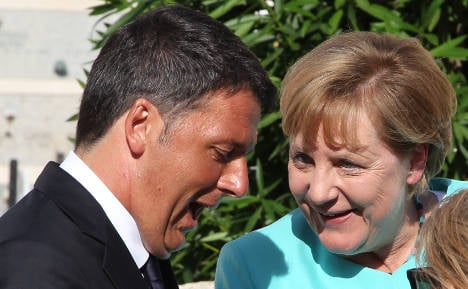 She made the comments at a press conference on the Giuseppe Garibaldi aircraft carrier, after talks with Renzi and French President Francois Hollande.

“Matteo Renzi has initiated courageous reforms including the jobs act here in Italy. It won’t show results within four weeks but it sets the parameters for a sustainable and successful Italy.

“I am doing everything in my power to support him with this,” she said.

Rome is seeking a new deal with the European Union to allow it to boost its weak economy with an expansionary 2017 budget.

A minister suggested earlier this month this could mean letting the 2017 budget deficit run higher than previously planned, possibly up to the three percent of GDP ceiling enshrined in the eurozone’s Stability Pact.

Asked about flexibility Renzi is seeking to finance investment in 2017 to kickstart Italy’s timid economic growth, Merkel signalled her openness.

“I think the Stability Pact has quite a lot of flexibility that we can use in a clever way. That is the responsibility of the (European) Commission – it’s not one (EU) member state that decides vis-a-vis another.

“We are all in a discussion with the Commission. We want Italy, France and Germany to grow such that jobs with future can be created and for me, that means creating conditions for private investment to have a chance,” she added.

The comments come as Renzi’s poll ratings are waning, and ahead of a constitutional referendum due before the end of the year which could trigger political instability.

Weighed down by sluggish domestic demand and a bad debt-laden banking sector’s inability to finance investment, the eurozone’s third biggest economy ground to a standstill in the second quarter of 2016.

That was bad news for Renzi, who has staked his political future on the referendum scheduled for November and has to produce a 2017 budget by mid-October.