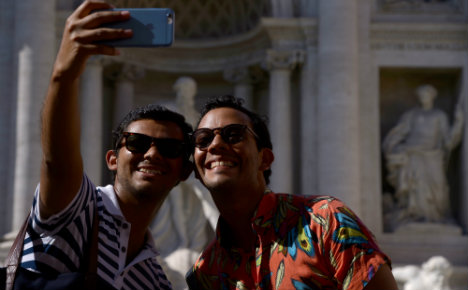 The study was conducted by the Spain-based travel data firm, ForwardKeys, which analysed figures from 200,000 tourism agencies around the globe to see where long-haul travellers to Italy were coming from this summer.

In June and July 2015, Saudi Arabian tourists accounted for 1.3 percent of all non-European tourists to Italy, but this year they made up two percent of the total, meaning the number of Saudi visitors increased by nearly two thirds.

“The high upswing in visitors from Saudi Arabia was significantly influenced by the timing of the end of Ramadan,” Laura Rodriguez, a lead analyst at ForwardKeys, told The Local.

This year,  the end of Ramadan moved forward by 11 days, which led to an increase in the number of Saudi Arabians travelling in June.

The number of American tourists booking has fallen by three percent, and the number of Chinese visitors dropped 17 percent. However, Rodriguez said it is unlikely the decline was caused by terrorism fears following attacks in Paris, Nice and Brussels over the last 12 months.

“Ascribing the fall to terrorism is questionable,” Rodriguez explained, highlighting that a myriad of factors have contributed to the decline in arrivals from outside the EU this summer, including the lack of any major international events in Italy.

“One needs to bear in mind that last year tourism was very strongly boosted by the Milan Expo,” Rodriguez added.

Aside from the Expo-effect, the report blames the drop in non-European tourists on external factors such as changing tastes and China’s slowing economy.

Eastern Europe is the in-vogue destination for American tourists this year, while China’s economic woes are keeping tourists at bay.

“Above all else, the weak Yuan has created poor exchange rates with the Euro which makes European trips a lot more expensive,” Zhang Bin, an analyst at Shanghai-based Sinolink Securities, told Corriere.

The number of bookings for August suggested the amount of long-haul tourists visiting Italy this month will be four percent lower than in 2015, but even with the number of non-European visitors falling, Italy’s tourism sector is flourishing.

A study published earlier this month by the Italian tourism federation, Federturismo Confindustria, suggested overall tourism figures for the summer of 2016 could rise as much as 10 percent on last year, thanks to the number of Italians opting to have a ‘staycation’ this year.

Some 20 million Italians have chosen to remain in the country for their holiday, and an uptick in the number of German, English and French tourists visiting the country has also been recorded.

The high tourist traffic has been felt by many, causing controversy in some towns which have been overwhelmed by visitors.

Locals have even called for councils to limit the number of visitors to tourist hotspots like Liguria’s Cinque Terre and the historic city of Venice, over fears the heavy traffic is damaging the infrastructure of the towns and eroding their traditional way of life.