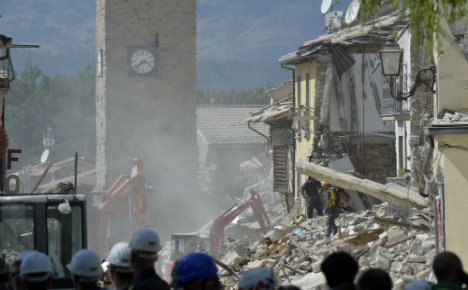 Flags will fly at half-mast across the country on Saturday to coincide with funerals for some of the victims.

At least 387 people have been hospitalised with injuries but no one has been pulled alive from the piles of collapsed masonry since Wednesday evening.

“We will go on searching and digging until we are certain there is noone left,” said Luigi D'Angelo, a local Civil Protection official.

Valerio Checchi, an officer with a forestry police unit, said he expected rescuers to shortly start using bulldozers to clear the debris in a sign virtually all hope of survivors has gone.

“We will still use thermal devices that can detect the presence of human bodies.”

The mayor of Amatrice said his best guess was that there could be around 15 more people still buried under the ruins of his devastated little town.

As powerful aftershocks closed winding mountain roads and made life dangerous for more than 4,000 professionals and volunteers engaged in the rescue effort, survivors voiced dazed bewilderment over the scale of the disaster that has struck their sleepy communities.

“I have been through earthquakes before, but this was not a quake, it was an apocalypse,” said Anacleto Perotti, 66. The resident of the tiny hamlet of St Lorenzo Flaviano has gone back to his house, which survived the quake.

But he is sleeping in an armchair. “It is too scary in bed. After a quake comes fear, depression takes you over from the inside.”

Prime Minister Matteo Renzi has declared a state of emergency for the regions affected by Wednesday's quake, which occurred in an area that straddles Umbria, Lazio and Marche.

The first funerals will be held in the city of Ascoli-Piceno for some of the victims who died in the villages of Arquata del Tronto and Pescara del Tronto in the mountains of the Marche region. President Sergio Mattarella will attend.

A total of 46 people died in the two villages. The youngest was between three and four, the oldest in her nineties.

Some 2,100 people who spent the night in hastily-erected tented villages were shaken by a 4.8 magnitude aftershock just after 6:00 am (0400 GMT) on Friday morning.

More than 900 aftershocks have rattled the region since Wednesday's 6.0-6.2 magnitude first one triggered the collapse of hundreds of ill-prepared old buildings across dozens of tiny communities playing host to far more people than usual because of the summer holidays.

Many of the survivors camping out in the tents were carrying plastic bags containing the handful of possessions – clothes, ID documents, phones and wallets – they had been able to grab before fleeing their homes in terror.

Quake experts have estimated that the cost of the short-term rescue effort and mid- to longer-term reconstruction could exceed one billion euros ($1.13 billion).

There are also fears of a negative impact of an already stagnating Italian economy with tourism, which accounts for four percent of GDP, certain to take a hit.

Analysts noted however that the disaster could help Renzi get clearance for reconstruction spending to be excluded from EU calculations of the country's compliance with budget rules.

At least eight foreigners were among the dead, according to media reports and updates from foreign ministries.

British media, citing an official in Amatrice, said three Britons had died, including a 14-year-old boy.

Romania reported two of its nationals, who were resident in Italy, had died. Spain, Canada and El Salvador each said that one of their citizens had perished.

Renzi's government and local authorities are now facing questions as to why there had been so many deaths in a sparsely-populated area so soon after a 2009 earthquake in the nearby city of L'Aquila left 300 people dead.

That disaster, just 50 kilometres (30 miles) south, underscored the region's vulnerability to seismic events — but preparations for a fresh quake have been exposed as inadequate.

“Italy should have a plan that is not just limited to the management of emergency situations,” Renzi said.