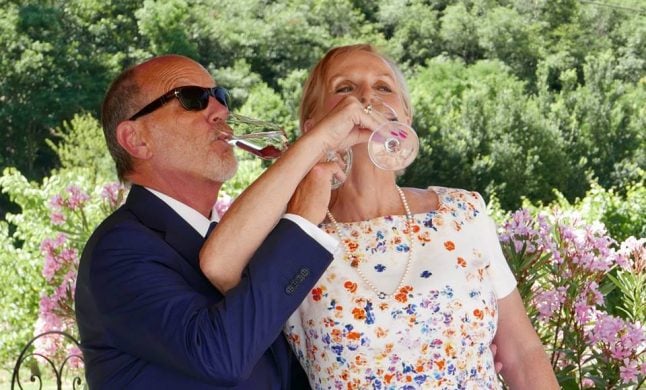 Tom and Orna on their wedding day in Veneto in July.

The Local Italy had only been running for a few months when we interviewed Tom Weber, an American who had been living in Italy since 2006, for our ‘My Italy’ feature in August 2013.

Tom’s first taste of Italy was in 1969, when he was sent to Vicenza on assignment for the US army.

He stayed for three years and then, 27 years later, got shipped back to the northern Italian city,  where he worked for the US army’s radio and TV service.

During his interview with The Local, the former journalist, whose wife died in 2011, talked about La Dolce Vita, a term which made its way into the English dictionary thanks to Federico Fellini's legendary 1960 film and is now among the most used phrases to describe Italy.

He was trying to sum-up his love of Italy while endeavouring to dispel the myth that life here is as sweet as it was during the symbolic 1950s and 1960s period when Audrey Hepburn, Brigitte Bardot and Sophia Loren could be seen hanging out at cafés on Rome’s Via Veneto.

Tom, who writes a blog called The Palladian Traveller, said: “Well, La Dolce Vita really doesn’t exist”. It was a sumptuous headline for us, and the story got a lot of reads, but needless to say it sparked controversy among some, who, hurt at what they took as a slight against Italy, vented their criticism at him via our comments section.

As the editor of The Local Italy, I knew the headline would attract a lot of attention. But it was perhaps taken out of context: what Tom went on to explain was that while La Dolce Vita was well and truly confined to that golden era for Italy, he still saw plenty of signs of good living around him.

But as the critics waded in, the story also attracted Orna, who leapt to Tom’s defence.

“I saw the interview and comments, people were being very harsh,” she told The Local.

“I realised Tom's words had been taken out of context. The interview then took me to his blog.”

Note: In October 2013, we also ran an interview with Orna, under another headline which also caused some dismay, but for entirely different reasons: ‘Italian bureaucracy works very well’.

It was through their shared passion for Veneto’s Palladian villas, designed by architect Andrea Palladio, that the couple initially bonded.

“I started following his blog and was interested in what he had to say,” Orna, who also writes a blog about Italy, said.

“He lived close by and liked Palladian villas. So we started chatting and he said, ‘If you manage to get us into one off-season then I’ll take you to lunch’. That was it. We met at Villa Poiana in December 2013 and became great friends; it blossomed from there.”

After a courtship of over two years, the pair, who are in their late 60s, got married in Veneto’s Euganean Hills in July, with all their family, including Orna’s four children, Tom’s two and the three grandchildren they have between them, flying in from the US and Ireland.

“We’d never have found each other had it not been for The Local Italy, I’m a fan of the site – I’d say it’s far more effective than dating sites!” Former journalist Tom wrote about the wedding day on his blog.

“What happens when two travel/foodie/photography bloggers finally meet face to face? Well, they discuss story ideas, writing styles and camera techniques, and then they get married,” he began.

He then went on to say: “Believe me, our marriage was, and still is, big news for residents living in these hills. Just think, two foreigners — an Irish Colleen and a Yank — pick their tiny little corner of the Bel Paese to take each other’s hand in marriage. For the moment, we felt like Mary Kate Danaher and Sean Thornton from The Quiet Man. No horse and buggy though, just Orna’s little panna cotta-colored Fiat 500. BEEP-BEEP!”

A former interior designer, Orna visited Italy plenty of times on holiday with her parents over the years, but decided to change her life completely and move here from Galway after they passed away.

“I didn’t want to grow old in Galway, what with its bad weather. And I’d spent so much time in Italy that I decided to move here,” she said.

“My four children – three are in Ireland, and my eldest daughter is in Australia – were very supportive and encouraging.

“I came to Italy quite naive – with stars in my eyes. But it’s been so worth it, living in Italy is wonderful.”

Orna soon found her ideal apartment in the Euganean Hills, which are south of Padova. And although she knew little Italian, she soon started to make friends as she tackled Italy’s bureaucracy – which she insists, as per the interview she did with The Local, works well in Veneto.

She has also written a book about home renovations and is mid-way through writing a novel, set in Veneto.

Since the couple met, they’ve travelled a great deal in Italy, keeping their readers in tune with their journey and sharing cultural insights on their blogs.

And now the inspirational couple are planning a move to Puglia, in Italy's south, where they bought a home which will be ready to move into at the end of September.

The Local Italy would like to wish Tom and Orna all the very best with their move, and may they enjoy many more happy years together here in Italy!