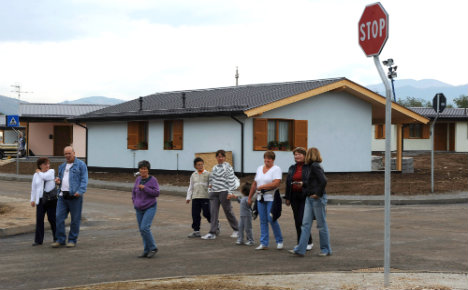 A temporary town at Onna, built after the 2009 L'Aquila earthquake. Photo: Vincenzo Pito/AFP

In total, 2,700 people have been left homeless across the northern Lazio and Marche region, the majority of whom are currently living in blue tent camps.

“We hope to complete the first temporary housing modules within four or five months,” Italy’s Infrastructure Minister, Graziano Delrio, was quoted as saying in Il Sole 24 Ore on Wednesday.

“We are working as fast as possible.”

The temporary settlements will house people in wooden chalets, each between 40 and 70 metres squared.

The new settlements will be built as close as possible to the hardest-hit towns of Amatrice, Arquata del Tronto and Amatrice, where some 2,500 people lost their homes.

“We need to keep people in groups, so as to keep the community together,” Amatrice Mayor Sergio Pirozzi told Corriere earlier this week.

The towns will be based on similar settlements built in the aftermath of the 2009 L’Aquila earthquake near the devastated villages of Onna and Fossa.

At Onna and Fossa, more than 5,000 displaced people still live wooden chalets and make use of wooden bars, churches and even sports facilities.

“It is unique among the temporary towns and even has a playground and a central square.”

In total, it is estimated that Italy will need to build some 700 wooden chalets for the survivors of its most recent quake, at an estimated cost of €35 million.

But while the wooden homes can be quickly erected, it is likely they will not be dismantled for a long time to come, while the earthquake-hit region is rebuilt.

“Previous experience tells us it will take years and we need to be patient,” Delrio added.