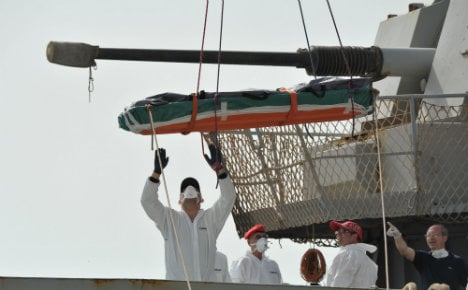 A migrant's body is lifted from an Italian navy ship earlier this year. Photo: Giovani Isolino/AFP

In one of the dramatic operations panicked migrants began throwing themselves into the water in a desperate bid to reach a vessel operated by Malta-based humanitarian group MOAS.

Some members of the crew also jumped into the sea in an effort to save the migrants, with 134 rescued, including six children, and seven dead recovered by MOAS.

In total “more than 2,700 people were rescued… Fifteen bodies were recovered in the operations,” the coast guard said in a statement.

Earlier in the day the Italian navy announced it had pulled the bodies of seven migrants from the sea, with another boat recovering an eighth corpse.

Two patrol boats also “recovered nearly 500 people during six rescue operations, including one involving an inflatable boat which was only just about floating, and from which some migrants had fallen into the sea,” the navy said in a statement

A huge wave of migrants arrived in Italy at the end of August, when some 14,000 people were rescued in the space of five days.

According to UN High Commissioner for Refugees (UNHCR) figures 117,590 migrants arrived in Italy between the start of 2016 and September 1st, around the same level as last year.

Italy is sheltering growing numbers of would-be refugees as its neighboursto the north move to tighten their borders and make it harder for migrants to travel to their preferred destinations in northern Europe.