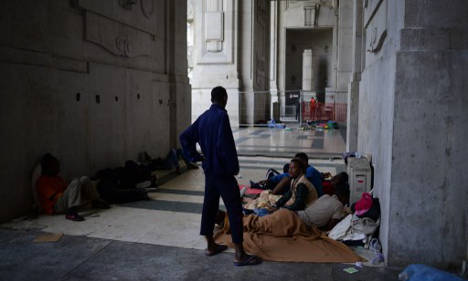 File photo of migrants at Milan train station. The arrests were made in Como and Milan. Photo: AFP

The group are thought to have transported hundreds of migrants illegally through Hungary and into northern Europe, most often with Austria or Germany as the final destination, police in the Lombardy town of Como revealed.

“The suspects used around 300 vehicles registered to dummy companies, and a vast network of smugglers of various nationalities, including Italian,” Como police said in a note.

One hundred of the cars used to smuggle migrants –  the majority of whom were fleeing the civil war in Syria – have been identified.

Italian police were assisted by Belgian, Swiss and French forces in the investigations, which began collecting information on the group, including the routes used and the cash flow, in October 2015.

The 21 arrests took place in Como and Milan in the early hours of Tuesday morning.

Most of those involved in the ring were resident in Como and the majority were of Syrian origin, police said.

Some of them were already known to police in their home countries and European arrest warrants had already been issued.

Both Como and Milan have been overwhelmed by huge numbers of migrant arrivals since the closure of the Balkan route.

An EU anti-trafficking operation has focused on the boats that arrive to the south of the country almost daily. Officials have been gathering intelligence by observing the boats at sea and speaking to migrants who arrive in Italy, and from October they have had the right to board and search vessels and make arrests at sea.

In early August, authorities said they had broken up a Naples-based trafficking ring headed by a suspected jihadist.

This came just weeks after 38 suspected migrant smugglers were arrested in southern Italy. The international ring is also thought to have been involved in illegal organ trafficking, with one former member saying the group sold organs of those migrants who did not survive the journey.