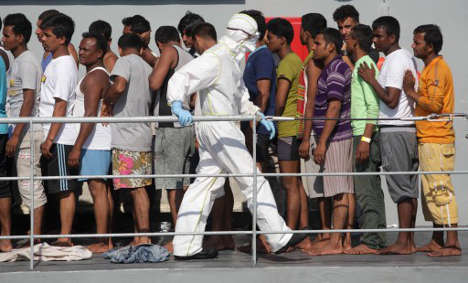 Migrants in Palermo after being rescued at sea. File photo: AFP

The pair had been accused of multiple homicide after 12 died when the flimsy boat deflated on the way from Libya to Sicily, with prosecutors calling for life sentences.

However, Palermo judge Gigi Omar Modica said the decision to pilot the boat was not made “independently and freely”, accepting the defence's argument that an armed band of Libyan smugglers had coerced the men into taking charge of the boat, threatening them with death.

Around a hundred migrants were crammed onto the boat, which measured just ten metres and deflated in the Strait of Sicily in July 2015. Twelve people drowned, and the two men identified by fellow passengers as the smugglers were arrested on arrival in Palermo.

“The two men had no other choice but to commit the crimes of which they are accused, in order to save their own lives from a situation beyond their control,” Modica said in her closing remarks. “Undertaking the journey meant a small hope of arriving safe and sound in a safe country such as Italy.”

The pair were migrants themselves; Jammeh Sulieman, 21, came from Senegal, and Bakary Dampha, 24, was Gambian, La Stampa reported. Their defence lawyers, Cinzia Pecoraro and Chiara Bonafede, argued that in Libya, smugglers armed with kalashnikovs threatened and intimidated the migrants, choosing two at random to take charge of the boat.

Prosecutor Claudio Camilleri will appeal the verdict in the next two weeks. Neither defence nor prosecution lawyers have not commented to Italian press and were not available for comment when contacted by The Local.

Many migrants make the perilous journey across the Mediterranean each year in the hope of reaching Italy, with the calmer seas making summer months the most popular time to travel.

Around 2,000 migrants have died making the crossing already this year, and numerous reports from those who have made the journey say that smugglers in Libya threaten them with death if they refuse to board the boat or try to escape.

An EU-wide operation to crack down on smuggling gave officers aboard European warships patrolling the water increased powers to board and search vessels and make arrests at sea as of October last year, however this case shows the difficulty in tracking down those responsible.