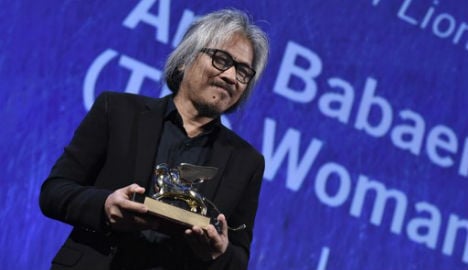 Filipino director Lav Diaz collects his Golden Lion. Photo: Tiziana Fabi/AFP
“I want to dedicate this film to the Filipino people and their struggle, and humanity's struggle,” Diaz said as he received the award.
Holding his Lion aloft, the man behind Melancholia (2008) and Century of Birthing (2011) thanked the jury, lead this year by British director Sam Mendes, who said the 20 films in competition had proved to be of “a wonderful, astonishing variety”.
In “The Woman Who Left”, a story about the absurdity of human existence, a wrongly convicted schoolteacher plots retribution against the ex-boyfriend who framed her, disguising herself in a bid to get close to her prey.
Released in the late 1990s after decades behind bars, Horacia (Charo Santos-Cancio) discovers her loved ones are either dead or gone, and the ex-boyfriend, now a wealthy underworld boss, becomes the target of her simmering rage.
At nearly four hours long, Diaz's film — nominally inspired by Leo Tolstoy's 1872 short story “God Sees the Truth, But Waits” — plays with the theme of moral accountability within a narrative coloured by kidnappings,
transgenderism and poverty.
Best actor went to Argentina's Oscar Martinez for his portrayal of a cynical Nobel Prize-winning author who returns to his village for the first time in 40 years in the comedy on art and fame, “The Distinguished Citizen”.
US actress Emma Stone received the best actress prize for her depiction of a struggling thespian who falls head over heels in love with a jazz pianist — played by Ryan Gosling — in US musical “La La Land”.
“I wish I could be there to make sure it's not an elaborate prank,” quipped Stone in a video message, saying she could “think of no better place in the world than Venice to premier 'La La Land', we had a wonderful time”.
Fashionista-turned-director Tom Ford was awarded the Silver Lion grand jury prize for “Nocturnal Animals”, a romantic thriller about former lovers starring Amy Adams and Jake Gyllenhaal, with a violent revenge tale told as a story within a story.
An emotional Ford addressed the audience in Italian, saying he had spent “some of my best years in Italy” and it was his “biggest dream to return to Venice” after premiering his first film here, “A Single Man”, in 2009.
The Silver Lion for best director was divided this year between Mexico's Amat Escalante for “The Untamed”, about the sex life of a tentacled extraterrestrial  creature, and Russia's Andrei Konchalovsky for Holocaust
drama “Paradise”.
“Jackie”, a bio-drama which stars Natalie Portman as the grieving widow of US President John F. Kennedy, meanwhile took best screenplay, with Chilean director Pablo Larrain saying the triumph was Portman's, calling her “the only woman who could have played this role”.
Ana Lily Amirpour — dubbed “the new Tarantino” by fans — scooped the special jury prize for her second film “Bad Batch”, a cannibal love story with Jim Carrey and Keanu Reeves about a young girl who ends up on the menu in a futuristic United States.
But there was no recognition for Terrence Malick's “Voyage of Time”, which wowed Venice audiences with its portrayal of the life and death of the universe through stunning special effects and real-life images taken from earth's most sophisticated satellites.