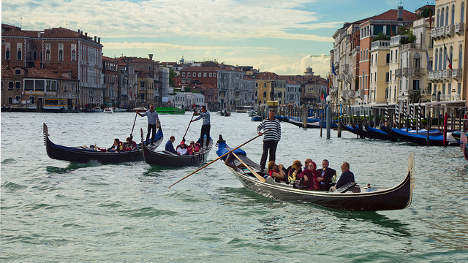 From beautiful mountains to sandy Mediterranean beaches, with plenty of art, history, culture and delicious food – there's a reason it's been the muse of generations of artists.

The country's monuments are world-famous and for good reason, but that doesn't stop some people finding fault.

Of course, long queues or stifling heat can make a holiday stressful, but some TripAdvisor users had more specific complaints, having made the trip to the bel paese only to leave feeling let down, or even confused, by some of its gems.

Here's a selection of reviews from people who didn't quite get Italy.

The Leaning Tower of Pisa 'Misleading… I spent all day walking up and down the beach but unfortunately there were no rabbits.'

'Lots of topless ladies which was very inappropriate.'

'Certainly not the romantic canal where you'd want to be with your gondola.'

'Just go to the Venetian in Las Vegas, you'll have a better time.' 'The place was in ruins'.

'The site neither moved me nor intrigued me on any level.'

'Walked in… walked out.' 'It's better just to look at art books.'

'I could see nothing great about Michelangelo's ceiling.' 'There are better views to be had elsewhere.' 'A badly conserved lump of concrete which may have once been beautiful.'

'One of the worst beaches I have ever been to.'

'Just Google it to see it. Waste of time going up there.'

'I expected something spectacular, like an alien ship or a fountain of youth. I was disappointed.'

Let us know what you think – have any of Italy's hotspots left you wondering what all the fuss is about?

A version of this article was published in July 2015.