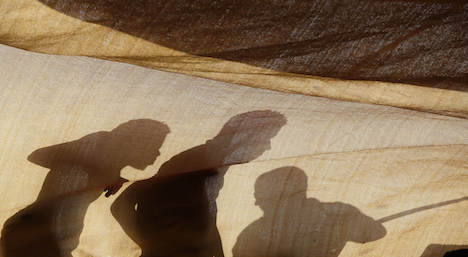 Library picture showing the shadows of migrants reflected on a sheet of a rescue vessel. Photo: Yara Nardi/AFP
The rescued migrants were rescued from five inflatable boats and one small vessel, said a coastguard statement, giving details of six separate operations.
An Italian navy vessel and a Maltese non-governmental group's boat were involved, along with Irish navy patrol boat the James Joyce, which recovered five bodies, the statement said.
On September 5, operations in the Mediterranean area between Italy and Libya recovered 15 bodies in a single day.
Italy is sheltering growing numbers of would-be refugees as its neighbours to the north move to tighten their borders and make it harder for migrants to travel to their preferred destinations in northern Europe.
According to Italian interior ministry figures Wednesday, the number of migrants arriving in the country since the start of the year reached 128,397, up 5.15 percent compared to the same period in 2015.