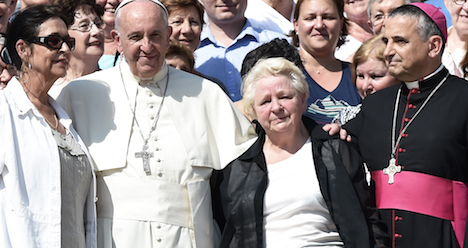 The Pope poses with Rosine Hamel (second right), sister of murdered French priest Jacques Hamel. Photo: Tiziana Fabi/AFP
Pope Francis on Wednesday denounced killing in God's name as “satanic” as he held a mass to honour Jacques Hamel, the French priest whose throat was slit by jihadists in July.
“Killing in God's name is satanic,” he said in his address which was attended by around 80 pilgrims from the northern French diocese of Rouen where the attack took place.
“He was a martyr,” he said of Hamel, describing him as a “good, gentle man” who had been killed “like a criminal.
“How good it would be if all religious confessions declared that killing in the name of God was satanic.”
The elderly priest was killed on July 26 while presiding over an early morning mass for a handful of parishioners in Saint-Etienne-du-Rouvray.
The pope's early service on Wednesday was held in the chapel at St Martha's, the boarding house where Francis stays and where a photo of the late priest was set upon the altar.
“Today the Church has more Christian martyrs than in the first centuries,” he said in his sermon which was delivered in Italian but translated into French for the visitors.
Christians were currently suffering persecution through being “imprisoned, tortured and killed because they refuse to deny Jesus,” he said.
“This cruelty which demands apostasy is, let us say it, satanic,” he said. Apostasy is the renunciation of one's religious beliefs.
Earlier this month, Francis met with French President François Hollande over the attack, and on September 24, he will meet relatives of the 86 people killed in a jihadist truck attack in the Riviera resort of Nice on July 14.