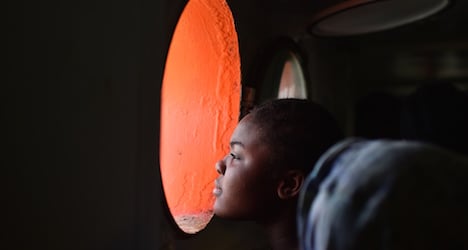 A woman looks through a window of rescue ship in the port of Cagliari earlier this year. Photo: Gabriel Buoys/AFP
Some 235,000 migrants and refugees in Libya are ready to make the dangerous Mediterranean crossing to Italy as soon as the opportunity arises, UN envoy Martin Kobler said in an interview published on Thursday.
According to Italy's interior ministry, nearly 128,400 migrants have arrived via the Mediterranean since the start of the year – which is a five percent jump over the same period in 2015.
“We have on our lists 235,000 migrants who are just waiting for a good opportunity to depart for Italy, and they will do it,” Kobler told Italian daily La Stampa.
“Reinforcing security is the most important issue at the moment. If we have a strong and unified army… then the dangers of terrorism and human trafficking will cease,” he added.
Libya's UN-backed Government of National Accord based in Tripoli is struggling to assert its authority and has been facing staunch resistance from a rival administration based in the country's remote east.
Fighting for control of the nation's oil assets has renewed fears of a civil war in Libya, which plunged into chaos after the 2011 uprising that toppled and killed dictator Muammar Qadaffi.
Libya's 1,770 kilometres of coastline have become a popular staging point for migrants seeking to reach Europe.
Kobler also said the offensive to capture key oil ports by Field Marshal Khalifa Haftar, who supports the rival administration in the country's east, was “very worrying.”
“Libya is in need of dialogue, stability and unity. I have contacted general Haftar and I am ready to meet him in order to find a solution allowing for the creation of a single army,” he added.