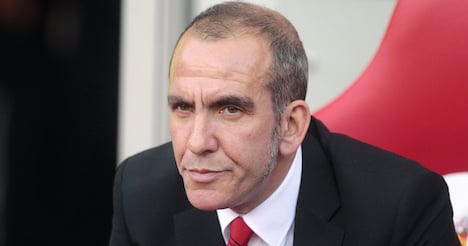 Paolo Di Canio. Photo: Graham Stuart/AFP
The maverick Italian former Sunderland manager fronted Sky Italia's coverage of the English Premier League on Sunday wearing a short-sleeved shirt revealing the controversial body art “DUX” written on his arm in capital letters.
Dux is the latin word from which the Italian Duce (leader, general) is derived – Il Duce was the name adopted by Mussolini, the Italian dictator.
“We made a mistake, we are sorry to all those who were hurt by this,” said Sky Sports executive vice-president Jacques Raynaud.
He added: “After speaking at length to Di Canio, and despite his professionalism and his expertise regarding football, we have decided together to suspend the partnership.”
Di Canio has been open in the past about his fascist sympathies. In 2005 he declared “I'm a fascist, not a racist,” after he was banned for making straight-arm salute to the crowd at Rome club Lazio. In his autobiography he described Mussolini as “basically a very principled, ethical individual” who was “deeply misunderstood”. Di Canio pictured when playing for Lazio in 2005. Photo: Paolo Cocco/AFP
Mussolini ruled Italy as prime minister first constitutionally then as a dictator from 1925 until 1943.
Born in Rome, the gifted and volatile Di Canio, 48, had a lengthy spell in Serie A with Lazio, Juventus, Napoli and AC Milan.
He then moved to Celtic and had stints with Sheffield Wednesday and West Ham, where he once sat on the pitch demanding manager Harry Redknapp substitute him, and Charlton.
After finishing his playing career back in Italy he went on to manage Swindon Town, infamously once fighting with striker Leon Clarke on the touchline, and in 2013 he had an ill-fated six-month spell at Sunderland.