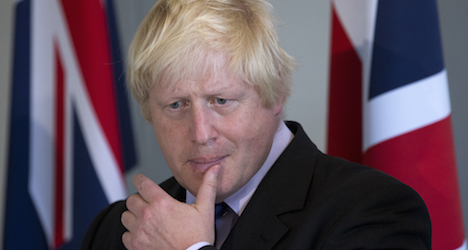 Boris Johnson. Photo: Justin Tallis/AFP
“We are determined in the UK to help Italy. We recognise this is a European problem,” Johnson told a joint press conference with Italian counterpart Paolo Gentiloni in Florence.
Johnson noted that British vessels HMS Diamond and HMS Enterprise were participating in the Rome-based EU military taskforce dubbed Operation Sophia, launched in 2015 with the aim of neutralising refugee smuggling routes in the Mediterranean.
Johnson said Operation Sophia was designed “to help turn back some of these boats … and I think personally they should be turned back as close to the shore as possible, so they don't reach the Italian mainland and they are more of a deterrent effect” to other vessels bent on heading for Italy from north Africa.
'Turned back .. sorry, saved'
“I think I'm right in saying we turned back 200,000 migrants, sorry saved, saved 200,000 migrants, so I do think it's the right approach,” insisted Johnson without specifying which migrants he was referring to.
HMS Enterprise was involved in a rescue operation to save 750 migrants off Libya on Thursday, the Italian coastguard said.
Italy is right in the front line for migrants seeking a new life in Europe having since 2014 seen some 450,000 people reach its shores.
According to Italy's interior ministry, nearly 128,400 migrants have arrived via the Mediterranean since the start of the year – a five percent jump over the same period last year.
Many board rickety, makeshift boats in the hopes of reaching the Italian island of Lampedusa some 300 kilometres away.
UN envoy Martin Kobler said in an interview published on Thursday that some 235,000 are ready to make the dangerous crossing from Libya to Italy.
“We have on our lists 235,000 migrants who are just waiting for a good opportunity to depart for Italy, and they will do it,” Kobler told Italian daily La Stampa.
The Operation Sophia ships can only board traffickers' vessels if they enter international waters, which they never do, and are often end up on rescue missions for migrants trying to make their way towards the Italian coast.
The EU force cannot enter Libyan territorial waters without a formal request by the UN-backed Government of National Accord which is trying to extend its shaky authority from Tripoli to the rest of the country.
Gentiloni reiterated the issue was a problem for Europe as a whole and not just Italy and would be addressed at Friday's EU summit in Bratislava, which is not being attended by British Prime Minister Theresa May following Britain's vote to leave the EU.