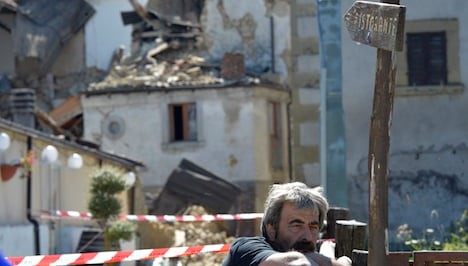 A man stands in front of damaged buildings in Torrita, near Amatrice, following the quake last month. Photo: Andreas Solaro/AFP
The quake of magnitude 4.1 struck at 1:34am on Tuesday in Rieti province, with the epicentre between the towns of Accumoli, Arquata del Tronto and Amatrice – the towns worst-hit by the disaster of 21st August.
Aftershocks of 2.1 and 3.2 magnitude were felt in the early hours of the morning, according to the INGV earthquake monitoring centre in Rome.
Emergency services say they received calls from concerned members of the public, but no injury or damage to property has been reported, according to Il Fatto Quotidiano.
Further tremors of up to magnitude 3.4 were felt later in the night in Perugia, 150 kilometres from Amatrice.
Many people in the Amatrice area are still living in temporary accommodation, with concerns that the tent villages erected in the wake of the disaster will become increasingly inadequate as autumn approaches.