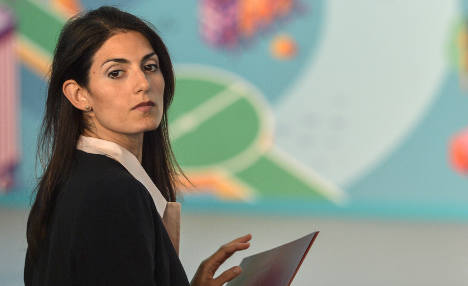 “Hosting such an important international sports event in Rome is an honour,” Raggi said at a presentation of the official Euro 2020 logo in Rome on Thursday.

The tournament is being staged in 13 cities across Europe to mark the 60th anniversary of the competition, with the semi-finals and final to take place at London's Wembley Stadium.

Rome will stage four Euro matches – three from the group stages and a quarter-final.

“These matches will have a significant economic impact on the city and its inhabitants,” added Raggi.

Sitting close to the mayor was Italian Olympic Committee (CONI) president Giovanni Malago, who on Wednesday lambasted her after she delivered an unequivocal no to his efforts to bid for the 2024 Olympic Games.

Rome did not need “more white elephants”, Raggi had said, and highlighted the spiralling deficits of former Olympic host cities.

After years of mismanagement of the Eternal City, putting on an Olympics is not top of Raggi's list of priorities.

“The Italian Olympic Committee is at the service of all the (sports) federations and all sporting events,” he said.

The CONI president had kissed Raggi's hand as they met on Thursday, but with a sombre look on his face, he added: “We are honoured to show that Rome is capable of hosting and organizing major international sporting events.”

Aleksander Ceferin, the newly elected chief of European football's governing body UEFA, hailed the Italian capital as having “a rich tradition and history and holds an important place in football”.