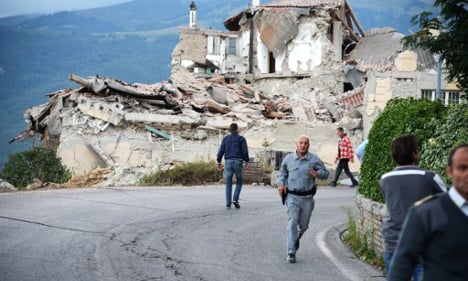 “Our country will rebuild the areas hit by the quake so they are as beautiful, more beautiful than before,” he told a press conference, as the civil protection agency rushed to move the last 2,500 or so homeless out of camps and into houses.

“It will be a reconstruction done without big promises, without turning it into a spectacle, without special effects,” he said.

The quake, which had a magnitude of 6.0 to 6.2, hit central Italy in the early hours of August 24th, devastating villages in the Lazio, Marches, Umbria and Abruzzo regions and causing at least four billion euros ($4.48 billion) worth of damage, Renzi said.

Aftershocks – including one this week which measured over 4.0 on the Richter scale – have spooked shell-shocked residents living in tent encampments in the mountainous region, with many taking up the offer of beds in hotels along the coast.

“Our priority is to shut the tent camps. We hope it will happen as soon as possible, many will be leaving as early as this weekend,” said Fabrizio Curcio, head of the civil protection agency.

Of the 9,000 sites inspected by the agency in the affected area, including 60 schools, over 45 percent of have been declared fit for use.

The tent camps will be replaced within the next seven months with wooden houses as reconstruction work on the hamlets and towns is carried out, while local businesses will re-open where possible in containers, he said.

Rome's financial police said Friday it had submitted its probe into the collapse of the Romolo Capranica elementary school in Amatrice – which was supposed to have been upgraded to modern anti-quake norms – to the National Anti-corruption Authority.

“You do not joke when schools are at stake, I speak as a father rather than a prime minister,” Renzi said, calling on Italy's mayors to invest in shoring-up sites of learning at risk across the country.

Reconstruction commissioner Vasco Errani pledged to rebuild the affected areas “so that with another 6.0 quake, buildings do not collapse and the citizens of those communities no longer risk their lives”.

Following previous reconstruction scandals which saw funds diverted into corrupt pockets, he said the 15 million euros donated so far would be accounted for down to the last cent on a public database under the mantra “legality, transparency”.