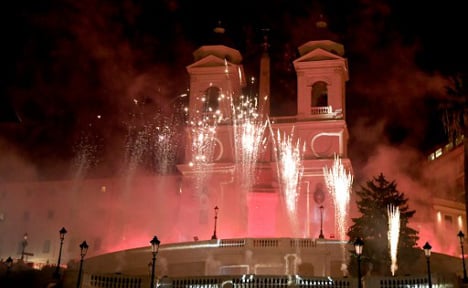 The steps re-opened with a spectacular ceremony. Photo: Tiziana Fabi/AFP

The famous marble steps will also stay open at night despite concern about potential damage to one of the architectural jewels of the Eternal City.

“The steps will not be closed at night. I think it is fundamental to let people have access… and to make them responsible for what they do at them,” said Rome Mayor Virginia Raggi. The opening ceremony saw the steps lit up with light displays and fireworks, as well as performances by dancers and an orchestra. Among the approximately 100 invitees were 30 Roman citizens – two from each district – who had been chosen by ballot to attend the celebrations.

Discoloured by years of pollution but also caked in chewing gum and stained by wine and coffee spills, the Spanish Steps were restored to their original white glory by a team of 82 workers. The €1.5 million ($1.7 million) restoration of the landmark, made famous in the United States by the 1953 film “Roman Holiday”, starring Audrey Hepburn and Gregory Peck, was financed by upmarket jeweller Bulgari. The firm's boss Paolo Bulgari has voiced concern about a return by “barbarians” to the Steps, near to which the jeweller has a store. The show on the newly-cleaned steps. Photo: Tiziana Fabi/AFP

In February 2015 supporters of Feyenoord Rotterdam, in the capital for a football match against AS Rome, ransacked the Piazza di Spagna at the bottom of the Steps, damaging its main fountain, known to Romans as La Barcaccia. Another scene from the opening ceremony. Photo: Tiziana Fabi/AFP

“The city pledges that the Steps will be maintained for as long as possible in its new splendour, and we will strive to prevent misuse which would damage it,” said Raggi.

The landmark, comprising 135 steps on three levels designed by architect Francesco de Sanctis between 1723 and 1726, had not been restored for 20 years.

The work was the latest in a string of famous Italian monuments to have been renovated with funds from private donors, often from the luxury fashion sector.

The first phase of a multi-million-euro makeover of Rome's Colosseum was completed in July, in a project largely funded by fashion and shoewear group Tod's. The amphitheatre was sprayed with water to remove centuries of grime, and the arched facades were strengthened.

Roman fashion house Fendi paid for a 16-month clean-up of the Trevi fountain which has been acclaimed by visitors. The nearly 300-year-old monument, visited by millions of tourists every year, hit the headlines in 2012 after bits of its elaborate cornice began falling off following a particularly harsh winter.

“Italy is a country of culture and so I challenge businessmen. What are you waiting for?” Matteo Renzi told journalists when quizzed on the future of the ancient site.