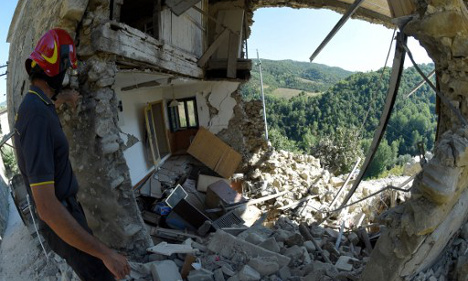 Damaged houses in Accumoli, where another earthquake has struck. Photo: AFP

Tremors were felt at 22:03 on Thursday evening, according to data from Ingv, Italy's National Institute of Geophysics and Volcanology. For now there have been no reports of further damage to the area, which is currently recovering from last month's quake.

The epicentre of the quake was located between the towns of Norcia, Accumoli and Arquata del Tronto, in the Perugia province. It had a depth of 11km and tremors were also felt in Ascoli Piceno and Ancona.

Immediately following the initial quake, another tremor measuring 3.3 occurred in the same area, with six further tremors in the next 30 minutes, the highest of which measured 1.9.

This latest quake comes just days after a quake of magnitude 4.1 struck at 1:34am on September 20th in Rieti province, with the epicentre between the towns of Accumoli, Arquata del Tronto and Amatrice – the towns worst-hit by the disaster of 24th August.

Severe aftershocks following the initial quake have made recovery a very delicate operation and caused further destruction in the towns, which the mayor of Amatrice described as “half-gone”.

One aftershock measuring 4.8 in magnitude caused additional damage to the centre of Amatrice, just two days after the initial disaster.