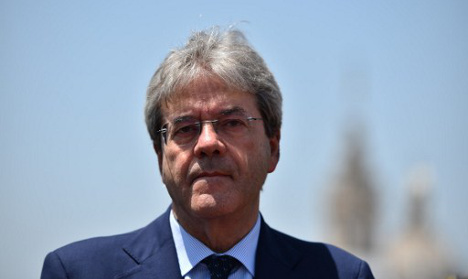 Italians were seething over Sunday's referendum in Ticino, where 58 percent of voters said they wanted to make it more difficult for foreign workers to land a job in the canton.

The Italian foreign ministry announced that the top diplomats in the two countries had spoken by phone about the referendum results.

During that discussion, Italian Foreign Minister Paolo Gentiloni warned that “any discrimination against our cross-border workers will be an obstacle to reaching an agreement between the EU and Switzerland,” the statement said.

And with London also watching the issue closely as a pos  sible template for Brexit negotiations, Brussels clearly felt the need to take a firm stance towards non-EU member Switzerland.

“The four fundamental freedoms of the single market (free movement of goods, of people, of services and of capital) are inseparable,” said Margaritis Schinas, spokesman for EU commission head Jean-Claude Juncker. “In the Swiss context, this implies that free movement of people is fundamental,” he told a daily briefing.

Swiss Foreign Minister Didier Burkhalter meanwhile tried to calm the tensions, stressing according to the statement that “yesterday's referendum in the canton of Ticino will have no immediate consequences for Italian cross-border workers.”

And in Bern, Swiss federal authorities told AFP that the Ticino vote called for a change to the canton's constitution, which would require a green light from the Swiss government and parliament, who would “take the final decision.”

“In any case, the process could be relatively long,” a spokeswoman with the Swiss migration authority told AFP, adding that it could take years before the measure voted on Sunday is implemented.

The text, entitled “Ours first”, was put to a popular vote by the populist right-wing Swiss People's Party (SVP).

It calls for changing the Ticino constitution to stipulate that when candidates for a job have the same professional qualifications, employers should prioritize those living in the canton over those living abroad, in a bid to fight “wage dumping” and unemployment.

In the run-up to the vote, SVP argued that the initiative aimed to find a solution for the Ticino labour market while waiting for measures at a federal level to kick in.

Of the 200,000 positions in Ticino, 63,000 are today held by cross-border workers, according to Swiss public broadcaster RTS. Unemployment meanwhile stood at 3.2 percent in Ticino in August, compared with 3.1 percent for Switzerland overall, according to statistics from the Swiss economy ministry.

Brussels cautioned that the vote would further complicate thorny negotiations with Bern. Switzerland saw its relations with the EU thrown into disarray when voters in February 2014 narrowly approved a referendum to curb immigration from the bloc.

According to the Swiss constitution, the referendum decision must be put in place by next February, but Bern's attempts to negotiate an acceptable solution have been complicated at best.

“The EU and Switzerland have been in intense talks for months now in order to find a solution on how to implement the Swiss popular vote on free movement in a way that respects obligations under the free movement agreement,” Schinas said.

“Yesterday's vote will not make the already difficult talks any easier,” he said.