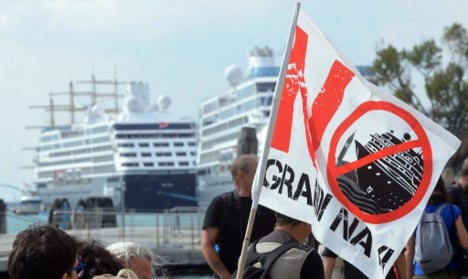 A protestor at a previous demonstration against large ships. Photo: AFP

With demonstrators armed with smoke bombs and dressed as pirates, around 30 small boats took part in the protest. Other campaigners and residents waved flags and chanted slogans from the shore, La Nuova Venezia reported.

“Thank you everyone! In spite of those who want a dead, resigned city, here is the great heart of the population. No to big ships! Venice is alive!”

According to organizers, a total of 2,000 people took part in the 'No to big ships' demonstration, including representatives from political parties, environmental organizations, and residents of all ages. The peaceful protests resembled a party, with food and drink, and music played from a barge at the shore.

But the message was clear, with the smaller boats surrounding the cruise ships moored in the lagoon and protestors shouting 'No to big ships!'

READ ALSO: Venice and the perennial woe of unruly tourists

Six of the cruise ships had planned departures between 4pm and 8pm, including two 90,000-ton giants, however the boats delayed their departure until nightfall, according to La Nuova Venezia.

This latest protest took place on Sunday evening, but the disputes over large boats sailing along the Giudecca canal have been going on for years, despite restrictions on the number and tonnage of boats allowed in the port.

The biggest cruise ships were banned from entering Venice back in 2013, in a bid to save the city. The ban has been introduced in phases, starting in early 2014 and aiming to cut cruise ship traffic by 45 percent – after it had risen by 400 percent over the previous five years.

Each year, around 600 large ships pass through Venice, and the movement of water can cause damage to the historic buildings of the city, which is a Unesco World Heritage site.

Unesco has even said that if the passage of large ships is not prohibited by 2017, the city will also be added to the list of sites at risk.

The UN agency had previously threatened to label Pompeii as an endangered site if significant improvements were not made to conserve the site. Luckily, the ancient city passed the test and Unesco praised Italy for the efforts made to restore and protect the ruins – but it remains to be seen what measures are taken in Venice.

Venice mayor Luigi Brugnaro has promised to crack down on unruly tourists, while the city’s tourism councillor, Paola Mar, has said the problem “gets worse and worse every year”.

In summer 2016, flyers began appearing across the city declaring: “Tourists go away!! You are destroying this area.”

The city has even introduced some 'locals first' policies to appease frustrated residents, including a decision in April that locals must be allowed to board water-buses ahead of tourists. A trial policy of two different queues for residents and visitors was put in place.

Other solutions to the problem which tourist chief Mar has suggested include publicity campaigns to promote the less popular areas of the city, such as the former Jewish ghetto for example, to ease strain on the crowded centre.