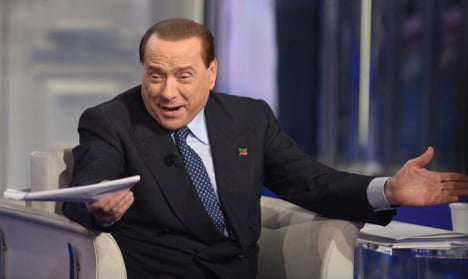 The former Italian prime minister and media tycoon has largely been absent from public life since undergoing open heart surgery in June and he says he plans to stay out of politics, an ungrateful mistress he now claims he never truly loved.

“I look towards the future still uncertain about what it may have in store,” he said in an interview with one of his publishing empire's own magazines, Chi, to mark the milestone.

“What I have come to realize, perhaps the most important thing, is that I will spend more time with my children and my grandchildren.

“I will dedicate more time to the people that I love and that is the way it should be: five children and ten grandchildren have turned me into a patriarch,” he added.

READ ALSO: Why so many Italians still love Berlusconi

Despite his penchant for hair transplants and plastic surgery, even Berlusconi has not been able to stop the march of time.

He underwent successful surgery in June to replace a faulty heart valve that could have cost him his life.

It was not his first intimation of mortality. He had a pacemaker fitted after a heart attack a decade ago and he was operated on for prostate cancer in 1997.

“Throughout my life I have never given any thought to my age. On the contrary I always lived as if I had 40 years because that is how I felt: full of curiosity and desire to do things,” he added.

“Then the (heart) illness arrived out of the blue. And with the operation I underwent I had a very strong realization that I am an 80-year-old man,” he revealed.

Other regrets include not being able to give enough time to his beloved AC Milan in recent years.

The seven-times champions of Europe have dropped to the level of also-rans in recent seasons having being starved of funds by their owner, who is now in the process of offloading the club to Chinese investors.

“If Milan has not done as well as before these past years, it is because I have not had the time to personally take care of it,” he lamented. That, he claims, is the fault of politically-biased judges who have pursued him in a string of legal cases ranging from corporate tax fraud to having sex with an underage courtesan at one of his notorious Bunga Bunga parties.

“For years I have spent at least three afternoons a week with my lawyer preparing the 3,600 hearings I have had to endure in 73 political trials,” he said.

READ MORE: The trials of Berlusconi

Tax fraud was the only crime the supposedly 'red' judges ever nailed Berlusconi for.

Most charges he got off because of court cases timing out and in the Bunga Bunga trial the judge accepted that he could not reasonably have known that 'Ruby the heart stealer' was 17 at the time of their encounter.

The 2013 fraud conviction saw Berlusconi kicked out of parliament and, like a spurned lover, he now insists he never cared.

“Politics was never really my passion. All it did was make me lose a huge amount of time and energy. If I entered the ring it was only to stop communists from getting into power.”

Berlusconi was Italy's longest-serving premier of the post-war period. But he does not appear to be leaving much of a political legacy.

Since his withdrawal from the political battleground, his party Forza Italia (FI), become marginalized, dropping from being Italy's biggest political force in 2001 to a rump support of around 10-12 percent of the electorate.

The Italian right as a whole meanwhile is divided between FI, the anti-immigrant, anti-EU Northern League and the New Centre Right, a minority partner in Prime Minister Matteo Renzi's centre-left dominated government.

Berlusconi has left the building, but no one has emerged to replace him.