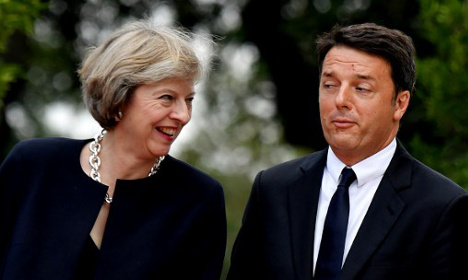 His comments are the latest from a European leader to highlight the tough stance Britain is likely to face in Brexit negotiations when it triggers Article 50, the two-year process for leaving.

“It will be impossible to give to British people more rights than other people out of the EU,” Renzi said, speaking in English.

“When David Cameron decided to use the referendum to solve some internal problem in the Conservative party, this was the problem,” he added in an English-language interview with the BBC.

Cameron quit as prime minister hours after Britain's shock referendum vote in June to leave the EU, having led the failed campaign to remain in the bloc.

He was seen as having called the vote in a bid to placate eurosceptic Conservatives and stem the rise of the anti-EU UK Independence Party.

Renzi added that the vote to leave the EU was “a bad decision” but the result should be respected.

International Trade Minister Liam Fox meanwhile said Britain's trade with EU members after Brexit should be “at least as free” as it is now.

“Protectionism never actually helps anybody at all and as we move into a post-Brexit arena, we want it to be as free and as open as possible,” he said.

“And don't just look at it from the UK perspective, the European Union has a massive surplus in goods with the UK. Who does it harm more if we end up in a new tariff environment? Does it harm more those who sell more to the UK, or the UK?” he added.

“It's in everybody's interests that, as we move forward, that we have at least as free a trading environment as we have today,” he said, warning that tariffs “will harm the people of Europe”.