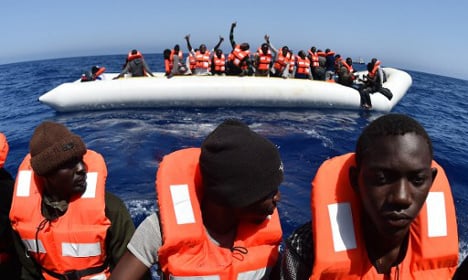 In a poignant reminder of the ongoing drama being played out on Europe's southern shores, the coastguard coordinated the rescue of a total of 39 distressed vessels, the bulk of them overcrowded rubber dinghies but also including five converted fishing boats crammed full of people, mostly Africans.

Just under 200 minors were among those saved from one of the former fishing boats which had some 720 people on board, according to NGO SOS Mediterranee.

Most of the minors were unaccompanied and nine were under five years old. At least 10 of the 191 women on board were pregnant.

Two women and a child had to be evacuated for medical treatment after suffering severe burns caused by spilled fuel during a rescue from a rubber dinghy by a boat operated by the Doctors without Borders (MSF) charity.

A young pregnant woman died from her burns after being rescued during a second operation by the MSF boat dignity, the charity said.

“It is unacceptable that in 2016 these people have no other choice than to embark on these incredibly dangerous sea journeys,” said MSF coordinator Nicolas Papachrysostomou.

The Italian coastguard said the operations had taken place in an area around 30 miles north of the Libyan capital Tripoli.

Separately, a Libyan coastguard official said that two children and nine women died on Monday when a small boat carrying migrants to Italy capsized off the shore of Libya.

It was unclear if the two fatal incidents were separate.

In the disaster three years ago, a fishing boat packed with some 500 people caught fire and sank rapidly in darkness just off the outlying Italian island of Lampedusa in the night of October 2-3rd.

A total of 366 bodies were recovered in the hold or washed up on the coast of an island where Pope Francis had, a few months previously, railed against the “globalization of indifference” towards the plight of migrants seeking better lives in Europe.

The disaster resulted in Italy's navy launching a large-scale search and rescue operation that has since evolved into a multinational effort involving groups like MSF and Save the Children.

The president of the Italian Red Cross, Francesco Rocca, said his organization's volunteers who had witnessed the horrors of that day were still haunted by it.

“Three years later and people continue to die in their thousands – nothing has changed. Indifference is killing people.”

Hundreds of thousands have been rescued but at least 11,000 people have drowned in the Mediterranean since the Lampedusa tragedy, according to figures collated by the UN refugee agency. Around 3,500 have died in 2016.

Italy has declared October 3rd a national day of commemoration and welcome in honour of the dead. Around 1000 people marched to the Gate of Europe, a five metre-high monument built in Lampedusa in 2008 which is dedicated to migrants who come to Sicily in search of a better life.

The latest people to be rescued will add to a total of some 132,000 migrants who landed at Italy's southern ports between the start of 2016 and the end of September.

The new arrivals are mostly Africans who plan to try to get to northern Europe but increasingly are obliged to seek asylum or the right to remain in Italy, where reception centres have been strained to bursting point.