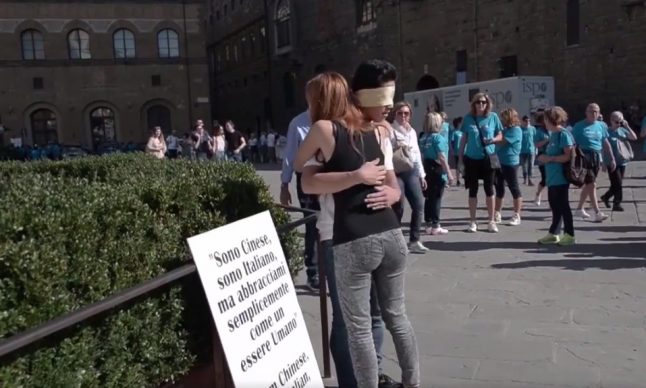 Massimiliano stood in a Florentine square with a blindfold and a simple message. Picture: UGIC

“I'm Chinese, I'm Italian, but hug me as a human being,” read the sign, while Massimiliano Jiang stood blindfolded, waiting to find out the reaction of passers-by.

A video of the experiment (below) was shared by UGIC, an organization for young people of Italian and Chinese nationality.

People of all ages and ethnicities cross the square to hug him – some even leaving their guided tours to do so.

The video, which was posted to Facebook with the status “feeling thankful”, has warmed hearts across the country and been viewed over 17,000 times on Facebook as well as being shared by national dailies Repubblica and La Stampa.

“The message is that we are all simply human beings and we should hug each other for solidarity and friendship, defeating the prejudices and stereotypes often generated by the superficiality of society and mass communication,” UGIC wrote.

However, since the stunt gained national media coverage, not all of the comments on the video have been positive, leading the organization to post a follow-up status, saying: “How come some people still criticize us and tell us to go back to our country? Don't they understand that Italy is our country?”

Florence is home to one of Italy's biggest Chinese communities, with over 17,000 Chinese nationals officially registered as living in the Prato suburb. But local sources say the number is closer to 50,000, with many working in illegal sweatshops in inhumane conditions.

Across the whole country, the Chinese community forms the largest non-EU group in Italy, after Moroccan and Albanian citizens.

In 2012, the Italian statistics agency, ISTAT, found there were 277,570 Chinese people legally living in Italy.