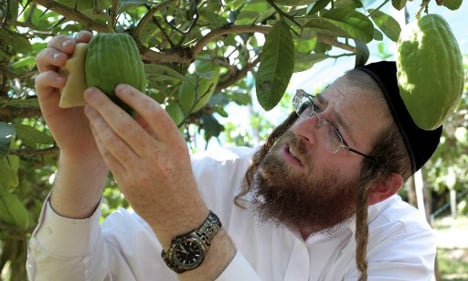 The citron is "God's fruit" in Judaism, but it's also part of daily Calabrian life. Photo: Alberto Pizzoli/AFP

Beads of sweat trickle down cheeks framed by greying sidelocks as Mann, a Hassidic Jew, turns a lime-green citron fruit over and over.

Finally, he delivers his verdict. “It's a nice shape, it's clean, it's a good size: it's kosher!”

Orchard owner Angelo Cava smiles as he looks on in vest and shorts. Citrons that pass muster for Sukkot sell for around 10 euros ($11) apiece, more than ten times the rejects destined for processing into candied fruit, jams, soft drinks and anti-ageing cosmetics. The next “etrog”, as the fruit is called in Hebrew, does not make the grade.

“No buono,” says Mann, pointing to a handful of tiny black spots that indicate that this citron has been nibbled by an insect and is therefore deemed unclean.

“The Bible tells us that the Sukkot fruit has to come from a beautiful tree,” Mann explains.

“We have learned that this means the citron and, for us, the best come from Calabria.”

The annual descent of dozens of rabbis, their trained assistants and other ultra-Orthodox Jews on this southern region has become a pilgrimage of sorts, one with roots in centuries of shared Italian and Jewish history. Notoriously hard to grow, the fragrant citron is one of four symbolic plants (along with palms, willow and myrtle) held while saying prayers during Sukkot, which begins this year at sundown on October 16th.

Translated into English as “Feast of the Tabernacles”, the week-long festival celebrates the unity of the Jewish people and the biblical account of their escape from slavery in ancient Egypt to the promised land via 40 years in the desert.

Mann could pass for a diamond trader as he studies another newly-picked citron with a magnifying eyepiece.

And like the gems business, there can be big money involved – with the best Calabrian etrogs changing hands for as much as $2,000-$3,000 in New York in the run-up to Sukkot. In London, a top price would be around £600 ($780/695 euros) but a shortage this year could push that higher, according to one dealer who was happy to share some tricks of the trade anonymously.

“I grade them 1-4,” he said. “Some of the 3s and the 4s might not be a perfect shape or have some slight blemish. But it is a selling thing, you need them to sell the best ones.

“People want the best. It's God's fruit, if you buy his fruit, He will be good to your fruit (children).”

Samuel Ekstein, a member of the Satmar branch of Hassidic Judaism, sells cameras in Manhattan when he is not in Italy sourcing citrons.

“Sometimes you have a good year, good fruit and you can sell them all. Sometimes you have problems and you don't have good fruit. What happens is, you (will have) lost all your money. It all depends on God. If he wants you to make money, if not, you know… it's a risky thing.”

According to local expert Francesco Fazio, an ex-mayor of Santa Maria del Cedro, Calabria's production of citrons dates back to the arrival of the first Jews in Italy more than 2,000 years ago.

A community has survived in Rome continuously since then but Jews were expelled from Calabria in the first half of the 16th Century as Spanish rule brought the anti-Semitism of the inquisition to southern Italy.

“The community was destroyed but they left many markers, including the Eastern method of farming,” Fazio said.

Citron growing dwindled generally but survived along the Riviera dei Cedri thanks to the favourable coastal micro-climate.

“An irreplaceable local culture has been passed down from father to son,” said Fazio.

“Through sacrifice and despite poverty, a piece of history has been preserved for humanity.” “It is not an easy fruit to grow. And the needles can really hurt you. It's very delicate and now with climate change, there seem to be more insects that attack it.

“You have to have a passion for it. But it is our tradition and if we stopped doing it, where would they get their citrons from?”

Calabria's citrons used to reach Jewish communities worldwide via wholesalers in Genoa – until some curious rabbis visited Calabria in the 1950s. To their horror, they discovered much of the fruit being produced from hybrid citron/bitter orange trees.

“The Torah asks us to pray on a citron,” says Shimon Lahiany, a Jerusalem-based “mashgiach” – a rabbi or authorized supervisor of kosher food production. He has been coming to Calabria for 20 years now on behalf of his Chabad (Lubavitch) sect.

“A grafted citron can be better for the farm, but we are not allowed to bless it for the simple reason it is no longer a citron,” he said.

Grafted trees usually have a giveaway bulge on the trunk. “But sometimes it's under the ground – you need people who have had the rabbinical training to spot them.”

Kosher citrons are also produced in large quantities in Israel and Morocco.

But for some Hassidics, buying produce from Israel is not an option.

“We believe the Jewish people are not allowed to (form) a nation before the Messiah comes,” explains Ekstein.

“So we don't take from Israel something we need for a holy (purpose).”