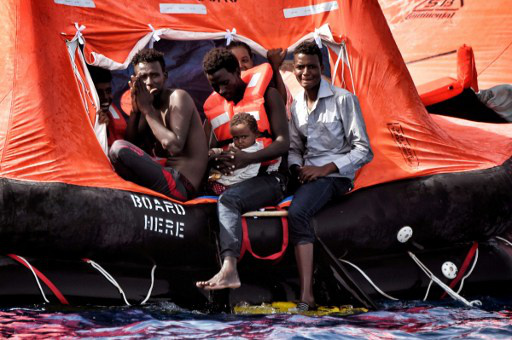 Those the rescuers manage to pluck from the ocean stammer grateful thanks to people they describe as their “angels”.

Those who don't make it drown, the fate of more than 3,500 migrants so far this year, according to latest official figures.

“You hear screaming, children crying, men shouting for help, rescuers shouting to people to stay calm, sit down, don't move,” said AFP photographer Aris Messinis, reflecting on the scenes he has witnessed in the course of his work chronicling this grim tragedy.

With no apparent end to the crisis and its tide of human misery, Tuesday saw more than 30 rescue operations in the Mediterranean saving around 4,700 migrants.

Travelling on the Astral, a vessel chartered by Spanish NGO Proactiva Open Arms to coordinate rescues, Messinis was present on Tuesday as it fell to the crew to place 29 dead bodies in a liferaft for transfer to the Italian coastguard.

The day had been one of frantic rescues off Libya.

The morning saw the Astral holding the fort in the area on its own after accompanying vessels headed to Italy to disembark the first groups of migrants they had plucked from the water.

As a flimsy wooden boat hoved into view, Messinis sprang into action with his camera.

Aboard were hundreds of men, women and children. Suddenly, there was panic. The boat swayed and all but capsized. Then a plume of smoke rise from the vessel.

Dozens jumped, screaming for help, some trying to hold babies aloft above the mad fray – Messinis' photographs bearing testimony to their utter desperation and fear.

Only the swift intervention of the Astral, whose crew dispatched liferafts and lifejackets, prevented tragedy.

“On Tuesday, they saved lives. They really saved lives. If these people had not been there, we would be talking about hundreds and hundreds of deaths,” Messinis said.

Yet not everyone survived on the makeshift craft, barely 12 metres (40 feet) long and carrying around 120 to 140 people. Also on board were 29 bodies, discovered later by the Astral crew.

For the rescuers themselves, conditions are tough with seasickness an ever present curse.

“I've been taking pills every day, the sea's moving a lot, it's too hard,” Messinis said of conditions on the Astral, just 35 metres long.

The rescuers comprise Spaniards, two Italians and one Greek, who prior to this mission had worked together off the Greek island of Lesbos, another hotspot of the migrant drama.

For the rescue team “there is so much pressure. There are thousands of people”.

“No time for speaking, only for action,” Messinis said as survivors were transferred to Italian boats as quickly and as humanely possible given the presence nearby of more migrants in difficulty.

The brief few minutes of contact between rescuer and rescued are emotional.

“They were so happy to be alive. They were saying, 'God bless you, you are our angels'.