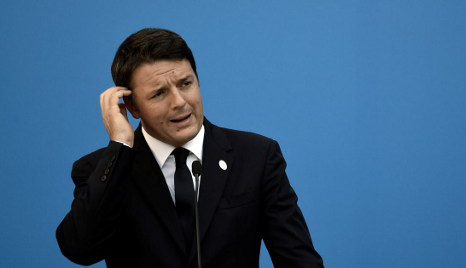 Some members of Renzi's own party have warned they will vote 'No' in the upcoming referendum. Photo: Aris Messinis/AFP

The changes are aimed at increasing political stability in a country which has had 63 governments since 1945, with Renzi's future riding on the outcome of the December 4th plebiscite.

For months the centre-left Democratic Party has been split on the issue, with a minority of lawmakers deeming the mooted reforms and the new electoral law which would accompany them to be dangerous to democracy.

In a bid to assuage the reforms' opponents within his own party, Renzi on Monday proposed a party committee be set up, including at least one member of the dissenting minority, to propose a new electoral law, but only after the December 4th referendum.

However one of the main voices among the naysayers, Gianni Cuperlo, warned that he would still vote against the proposed constitutional amendments unless changes are made ahead of the poll.

Cuperlo added that he would resign from parliament if the plans weren't changed.

Like other “rebels” he also warned of a possible split in the Democratic Party's ranks.

“If you win (the referendum), you will be left with a field of rubble,” he said, in comments aimed at Renzi, accusing the prime minister of causing tension by angering deputies further to the left.

The proposed reforms – deemed the most important in Italy since World War II – would streamline parliament and the electoral system in the hope of bringing the country badly-needed political stability.

But the vote is shaping up as a referendum on Renzi's two-and-a-half years in office. He initially promised he would quit if the measures are voted down at a referendum.

Since then, Renzi has repeatedly nuanced those words, saying he had “committed a mistake by personalizing” the vote but had merely sought to convey “a message of seriousness and responsibility.”

The reforms, already approved by the two chambers of parliament earlier this year, would bring an end to the existing system whereby each law must be adopted by both chambers in the same terms – a process that can take years.

Other Democratic Party heavy hitters have, like Cuperlo, already said they will vote “No” in December. These include former party secretary Pier Luigi Bersani and former prime minister Massimo D'Alema.

For his part Renzi believes the majority of his party is behind him and described the referendum row as an excuse used by the minority in a bid to oust him.

The compromise proposed by the prime minister was adopted unanimously on Monday, as his party detractors did not take part in the vote.

Opinion polls on the referendum suggest a tight vote with the “No” camp just ahead.

All the opposition parties are campaigning against the constitutional reform measures, and Italy's European partners are watching the proceedings with some concern.