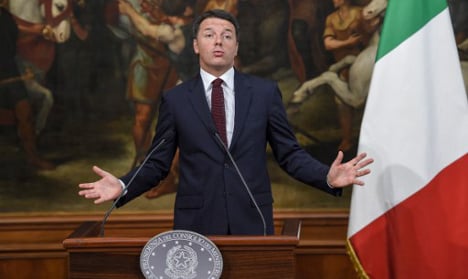 Who's afraid of a referendum? In addition to Italy's upcoming vote, France's Nicolas Sarkozy has promised two if he wins the presidential election next year, but as the recent shock votes in Britain, Colombia and Hungary show, the risks are high.

In London, ex-prime minister David Cameron hoped to use a popular vote on whether Britain should remain in the European Union to rein in a belligerent anti-EU wing of his own Conservative Party – but it spectacularly backfired.

“He will be remembered as the man who accidentally took us out of Europe,” former Conservative party minister Ken Clarke said after the June vote and Cameron's resignation.

Colombian President Juan Manuel Santos had no better luck, calling a referendum this month on a historic peace deal between the government and the Revolutionary Armed Forces of Colombia (FARC), only to see it rejected by voters.

“Politicians do not know how to draw lessons from history. If we look at the recent referendums, they were all miscalculated,” Professor Iain Begg, a research fellow at LSE's European Institute, told AFP.

“Very few referendums go the way forecast” by those in power, he said.

As his counterpart at Lausanne University, Oscar Mazzoleni, points out: in cases like Italy, referendums are a seized as a chance for a protest vote.

“They are emotionally charged, it's an opportunity for people to vent.”

Italian Prime Minister Matteo Renzi is well aware of the dangers he faces with his December 4th ballot on constitutional reform, aimed at streamlining the political system and increasing government stability.

Having said months ago that he would resign if voters reject the reform, he is now scrambling to insist it is not a personality contest, and admitted it was a “mistake” to personalize the referendum. He is even facing opposition from within his own party, and battling to avoid a party split.

“I know I'm not the most likeable person in the world,” he admitted in a television interview last weekend. “But voters who cast their ballots based on likeability clearly have little interest in the good of the country.”

It may be too little, too late.

“Renzi is running a risk. He was counting on using the referendum to consolidate his political power, but his wavering – presenting it as a vote on his fate, then back-peddling – is harming him,” said Domenico Fracchiolla from Rome's Luiss University.

There are few referendums in which voters actually answer the question posed, and Italy is no exception, commentators say.

“The December 4th vote is not about constitutional reform, an issue most Italians know nothing about,” La Stampa daily said.

“The real question, the one they'll be answering 'yes' or 'no' to, is: “Do you still have more faith in Renzi than in his opponents?”

But with more than 98 percent of those who did cast their ballots saying “No” to an EU migrant quota plan, he could spin it as a victory of sorts.

“It may be normal in Switzerland, but it is rare for the British, Italians and French to face referendums and they can quickly go wrong,” Begg said.

“Even if there are good reasons to put the vote to the people, the fact is it's a “yes” or “no” vote, there is no in-between.”

Switzerland seems to be exception that proves the rule, with its citizens voting every three months on popular initiatives, presented by parties or citizen groups, and referendums put forward by the State.

“There is a great voting tradition, which means the elites have learned what is necessary to inform, persuade and prepare public opinion,” Swiss political scientist Pascal Sciarini told AFP.