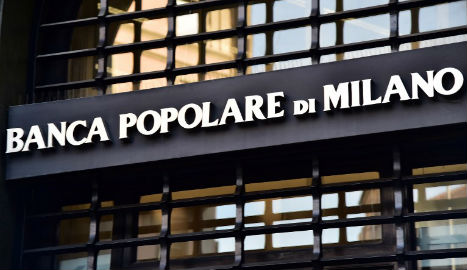 The merged bank would be the largest lender in Northern Italy, one of Europe's richest regions: Photo: Giuselle Cacace/AFP
It is not yet a done deal: while the Banco Popolare votes are widely believed to be in the bag, there are fears shareholders at the Banca Popolare di Milano (BPM) may sink the merger, with two associations of former BPM
employees set against it.
The bank wrote to shareholders Monday to urge them to turn out and cast their ballots at the extraordinary meeting on forging “Banco BPM”, which would be third only to giants Intesa Sanpaolo and UniCredit.
This is an “important choice” in a “context of great uncertainty for the Italian banking system,” BPM's CEO Giuseppe Castagna and board chairman Mario Anolli stressed in the letter.
The merger has been on the books since March and has since got the green light from the European Central Bank (ECB), which required Banco Popolare to carry out a capital increase for 1 billion euros ($1.1 billion), which the
bank duly did.
The merger represents “the best option to lead together and avoid suffering later”, Castagna and Anolli warned.
“The current developments in our industry are an inevitable process, and the dimensional and qualitative jump we will vote for at the assembly will allow us to continue to grow, taking advantage of having made the first move,
and face the future with serenity.”
The new bank would have 25,000 employees, 2,500 branches, 4 million customers and would be a leader in northern Italy, one of the richest areas in Europe, managing some 171 billion euros in assets.
With chances for a “yes” win boosted by a large presence of shareholders at the meeting, BPM is covering part of the costs for those who have to travel some distance to attend.
Over 12,000 of the bank's 50,000 or so shareholders have registered, suggesting a record participation at the vote, which needs a two-thirds majority to be valid.
Two associations of shareholder retirees have called on those casting their ballots not to be intimidated, and vote “no” to stop the creation of a bank which would be a giant with “feet of clay, worn away by an enormous mass of
deteriorated credit”.
But the unions, which have negotiated and won concessions on welfare and employee representation, support the merger.
The tie-in would be the first following a landmark reform of cooperative banks passed by Matteo Renzi's government in early 2015 in a bid to promote consolidation and efficiency.
The reform scrapped restrictions on ownership and voting rules giving shareholders one vote each regardless of their stake.
The collapse of the merger would be a blow to Italy's troubled lenders, which hold 360 billion euros ($400 billion) of bad loans — about a third of the eurozone's total — and have been hit by the market turmoil sparked by
Brexit.
Should they be left to fend for themselves individually, Banco Popolare and BPM “will certainly be more vulnerable”, particularly regarding foreign investors looking to buy control of the institutions, Milan Polytechnic expert Marco Giorgino told AFP.
A “no” victory “would also be seen, especially by international investors and analysts, as a sign of failure of the Italian banking system to change and increase its stability,” he added.
As far as the unions are concerned, there really is only one choice: “BPM shareholders have the responsibility to vote not only for the future of their bank but also for the entire Italian banking system.”
Url copied to clipboard!