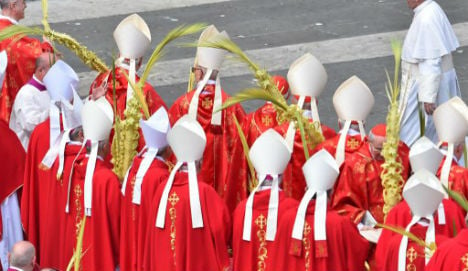 Cardinals gather in St Peter's Square to celebrate Palm Sunday: Photo: Vincenzo Pinto/AFP
Plans to open a McDonald's next to Saint Peter's Square in Rome have angered cardinals, including a group of the red-hatted “Princes of the Church” who live above the proposed site.
“It's a controversial, perverse decision to say the least,” Cardinal Elio Sgreccia said in an interview with La Repubblica daily on Saturday.  Opening a branch of the US fast-food chain in a piazza to the right of the
Vatican's basilica is “by no means respectful of the architectural traditions of one of the most characteristic squares which look onto the colonnade of Saint Peters,” he said.
Sgreccia does not live in the building but was speaking on behalf of the seven cardinals who do reside above the site, which covers 538 square metres (5,800 square foot), and is being rented out by ASPA, the authority in charge of the Vatican's real estate.
One angry cardinal has even written a letter to Pope Francis urging him to intervene against a commercial decision which would bring 30,000 euros ($33,000) a month into the Vatican's coffers but at a noisy, burger-smelling price, La Repubblica said.
Moreno Prosperi, head of the Committee for the Protection of Borgo, the historic district around the Vatican where many cardinals live, told AFP that the planned outlet would be a further blow to the area which draws huge
throngs of tourists.
“Over the last few years, the identity of this area has been lost” due to an increase in illegal souvenir stands and mini markets, he said.
Other members of the committee say it is madness to pack more people into an area considered at high risk of a terror attack.
Instead of a Golden Arches near the heart of the Roman Catholic Church, the space should be used to house entities which help the needy, in line with the pope's call for “a poor Church for the poor”, Sgreccia said.
But Cardinal Domenico Calcagno, head of ASPA, told La Repubblica he was “not going to back down” because the deal is legally valid and he didn't see “anything negative” about it.
“I don't see the scandal,” he said.