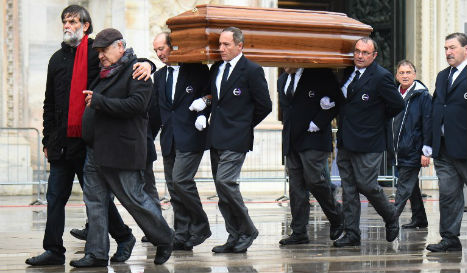 Jacopo Fo, son of dramatist Dario Fo, during the march. Photo: Giuseppe Cacace/AFP
The funeral cortege wound its way in heavy rain from the Piccolo Teatro Strehler where Fo's coffin had been lying in state, with mourners singing political ballads in honour of the left-winger, who died on Thursday aged 80.
Crowds taking shelter under a sea of coloured umbrellas in the northern Italian city's Piazza Duomo chanted “Dario! Dario!”
Fo's son Jacopo and some of the country's cultural elite spoke in honour of a provocative playwright unafraid to clash with authority.
“We are celebrating the greatest among us, who had the ability to ridicule the powerful by pulling faces,” Fo's close friend Carlo Petrini, founder of the Slow Food Movement, told the crowds.
On this day of mourning, “it's better to be generous than miserly. We will pop corks, sing, dance, and make love”, he said.
Fo, one of the leading figures in 20th century farce and political theatre, best known for his works “Accidental Death of an Anarchist” and “Can't Pay, Won't Pay”, won the Nobel prize for literature in 1997.
He told the Swedish Academy the award also belonged to his wife and life-long collaborator Franca Rame, who died in 2013.   “We're Communists and atheists but my father never stopped talking to my mother and asking her advice,” Jacopo Fo said.
“It's not possible to really die. I'm sure they are together now and sharing a lot of laughs,” he added.
As the ceremony came to a close a group of musicians outside the cathedral struck up a band version of “Bella ciao”, an Italian partisan song sung by the anti-fascist resistance movement during the Second World War.
“When Dario Fo won the Nobel, half the country — out of jealousy or to taunt him — tried to belittle it,” writer and journalist Roberto Saviano told journalists after paying his respects.
“This is an ungrateful country, but there is also an authentic part which has always protected (Fo) and listened to him. He taught me not to be a pushover, to have fun being a critic and never to take myself too seriously,”
he said. 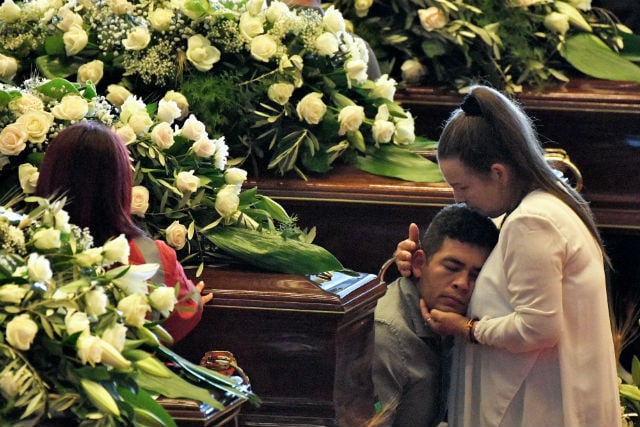 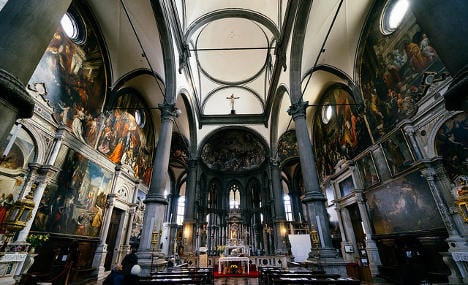 Father Michele Delle Foglie pinned the mass notices to walls around the town of Grumo Appula, where Sollecito was born, inviting people to attend the memorial mass on Tuesday evening.

Sollecito, thought to have been a high-ranking member of Montreal's Rizzuto crime family, was gunned down while driving his car in May, a “mob hit” which Canadian police said was part of an “ongoing dismantling of the older generation” of the mafia clan.

The notice read: “Father Michele Foglie, spiritually united with family living in Canada and his son, Franco, who is visiting our town, invites the faithful of our community to celebrate a mass in memory of their relative.”

A funeral for the 67-year-old was held in Montreal, and attended by 200 people, but his son, Franco, asked for a  mass to be held in his hometown.

“The mass does not honour, but remembers him,” insisted Father Michele as he sought to calm the controversy.

But Francesco Cacucci, the Archbishop of Bari-Bitonto, issued a ban on the public celebration, describing it as a “serious scandal” while threatening disciplinary action against the priest, La Stampa reported.

A private mass for Sollecito was instead due to be held at 6am this morning.

Italians were outraged in August 2015 after a Rome mafia boss was given a lavish send-off, with his coffin carried through the streets of the capital in a gilded horse-drawn carriage and rose petals dropped from a low-flying helicopter.

The Catholic Church and local authorities were left shame-faced as the event attracted international headlines. 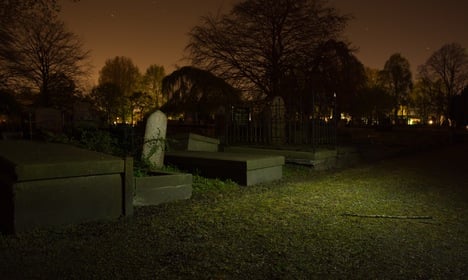 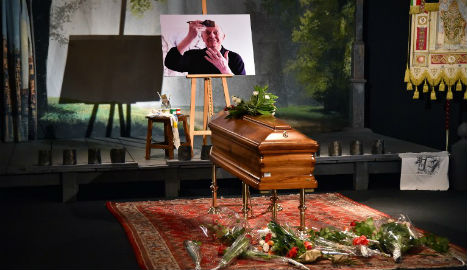